Come fly with me 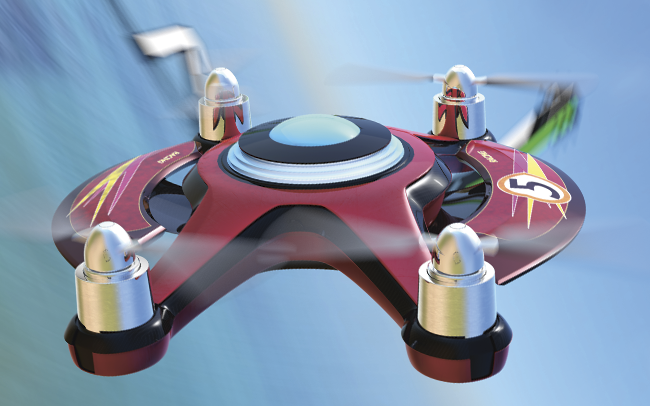 Private users of unmanned aerial systems (UAS), more commonly known as drones, in the UK will soon have to register and undergo safety and privacy training, under new regulations announced by the country's government.

The clampdown, which will be welcomed by both commercial users and the insurance industry, follows 22 incidents this year involving commercial airliners and possible drones.
In July, a drone strayed too close to London's Gatwick Airport, leading to the closure of the runway and forcing five flights to be diverted. Three months earlier, a drone hit a British Airways flight from Geneva as it approached Heathrow Airport. The plane landed safely but the incident led to a police investigation and the Civil Aviation Authority (CAA) said it was "totally unacceptable" to fly drones close to airports.

Those on the ground are at risk too. Olympic skier Marcel Hirscher had a lucky escape at a World Cup race in Italy, when a drone crashed onto the piste just inches behind him.
And these incidents could become more frequent as drone usage continues to grow. In the US, the Federal Aviation Administration (FAA) estimated there were more than 600,000 UAS deployed for commercial use, with another 1.9 million in recreational use at the end of last year. The FAA expects those numbers to triple by 2020.

In the UK, there are about 3,500 commercially registered UAS -- a figure that is set to double year on year during the next few years.

This growth is driven by the wide range of functions that drones can serve, from pizza deliveries to aerial photography, agriculture to aviation. UAS are now operating in hazardous sectors such as oil and gas, construction and engineering. They are also transforming the way emergency services operate and helping to save lives.

However, advances in technology are inevitably accompanied by new risks. UAS raise two priority safety concerns: mid-air collisions and the loss of control. And this growth is also creating opportunities for insurers.

"There are two sides of the market -- the private sector and the commercial sector. In terms of insurance for the commercial sector, there is a requirement firstly that the operator has had some formal training and has some liability insurance," says Tom Chamberlain, underwriting manager for aerospace and general aviation at Allianz Global Corporate & Specialty. "The UK market is between £5m and £10m. If you look at the way the US has exploded in terms of growth, you can see this doubling easily this year and adding another 50% the
year after."

Drones can pose a number of other risks with concerns that UAS could be utilised to attack sports stadiums or other events where large crowds gather or pose a serious terrorist threat targeting power and nuclear stations.

In addition, common spectrum banding leaves drones vulnerable to cyber attack, including jamming, interception and manipulation. Insurers are increasingly finding that they are covering the cost of the technology attached to the drone, such as cameras, which are often far more valuable than the drone itself. Typically, UAS insurance will cover users for liability, cyber and privacy.

"Covering drones is very different to covering manned aircraft. The wording began as a bastardised aviation wording and went through a few iterations because we were picking up losses that we either weren't clear about or didn't understand," says Jay Wigmore, head of general aviation and product development at Tokio Marine Kiln. "The latest wording is a bigger step away from aviation and more of an aviation/tech wording. It speaks more of the language of the people insuring the actual systems."

One challenge for insurers is the lack of claims data for the sector, which makes accurately pricing business a challenge and means carriers only cover the private sector.

Mr Wigmore continues: "We only insure commercial uses and to operate commercially you need a permit from the CAA. As well as a permit, we require either the manufacturer's training or some kind of recognised flight training. It is key that operators are pilots rather than people who just get a UAS out of the box and fly it around."

One key difference between UAS and manned aircraft is the fact that anyone can start flying a drone whereas even amateur pilots need to undergo some training and fly with supervision until they get a pilot's license.

"One of the biggest threats to the sector is hobbyists. The reason we don't insure the hobbyists is because there's not a great deal of regulation around them. The danger is that anyone can go and get a drone out of the box at Maplin and start flying," says Mr Wigmore.

"However, this negative public perception should be balanced against the useful work and benefits that drones are capable of providing in a wide range of applications."

Helen Cope, marketing manager at industrial drone consultant ConsortiQ says: "All of the emergency services, including fire and rescue, police, and search and rescue, are transforming the way they operate thanks to exploring the uses of drone and the increased flexibility it gives to them.

"What's more, hazardous sectors such as construction, engineering and oil and gas benefit from this improved safety, using camera drones to inspect dangerous sites and machinery, with personnel carefully controlling the vehicle rather than putting their lives at risk.

"This aspect alone is transforming numerous industries for the better. The need to invest in and support drone research development and implementation is integral to building a safer, more efficient future."Technological advances, improved training, increased safety measures and a more positive public image can all help the drone market to continue growing. However, the regulatory environment in the UK continues to slow down the UAS industry. Mr Wigmore says: "Most UAS at the moment can't detect other manned or unmanned aircraft; until the technology has advanced enough for that on the drones, that won't change. As soon as that restriction goes, the market will grow even more." The CAA regulates the drone industry in the UK under CAP 722. However, the regulation is evolving as the technology and its uses continue to evolve with groups, including some vocal businesses, advocating a faster rate of change.

Mr Chamberlain says: "Amazon is pushing heavily to get some regulated airspace so they can start using these for deliveries. They have a nice video on their website where they show proof of concept for delivery from a drone. They're pushing heavily for an airspace corridor for these drones so they don't interfere with general aviation flights. When that comes we'll see another shift in usage."