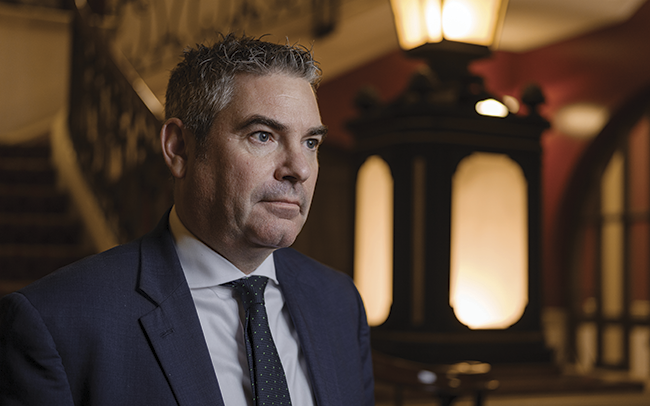 As a former broker and now MP for north Warwickshire and Bedworth, Craig Tracey has a rounded view of the insurance profession. He speaks to Luke Holloway-¦

Craig Tracey has the rare benefit of looking at the insurance profession from both sides. Now MP for north Warwickshire and Bedworth, Mr Tracey hails from an insurance background, having joined his father's broking company after leaving school, before setting up his own broker and spending more than 20 years in the profession.

"One of the reasons I got into politics was regulation and the challenges and lack of understanding for small businesses. I loved the customer services side of insurance, dealing with people, managing risks, but 80% of my time was spent on compliance. Eventually, wife said to me: 'Either stop moaning or go and do something about it!'

Mr Tracey is always ready to raise the importance of insurance as an industry and contest the issues that matter to the profession and the public. He cites the recent Budget, in which insurance premium tax was not raised, and feels the industry did a great job of lobbying for a positive outcome for its customers.

He has also been heavily involved with policymakers on the Civil Liability Bill, containing both whiplash reforms and the Ogden discount rate, which will mean the public will see direct benefits in their future premiums.

As we meet, Mr Tracey has just held a debate at Westminster Hall to discuss the impact of absence from work due to mental health problems on businesses.

"The findings are quite staggering, with the annual cost of poor mental health to employers in the UK as much as £44bn," he says. "The debate also highlighted insurance products available that can help form part of the solution. Businesses need to have processes in place to ensure staff are properly supported, but also that they have insurance in place that helps manage the situation.

"During the debate, I referred to the CII mental health report recently published in association with the mental health charity Mind. It is fantastic that the CII is involved so positively in this.

"I also recently read the Insuring Women's Futures report on the pension deficit for women in the UK and I've actively used that report in parliament -- it was incredibly useful and raised many important issues.

"Overall, it is excellent to see the insurance profession working closely with charities and researchers to become part of the solution."

Expanding on his involvement with the CII, Mr Tracey is adamant that working with outside organisations helps him to do his job as an MP effectively.

"The insurance bodies that I deal with have made huge progress in recent years, and do represent their members and the public extremely well"

"You hear the phrase 'the Westminster bubble' and it really does exist. If it wasn't for organisations like the CII, ABI and BIBA, there is no way I could keep up with the advancements being made and the challenges that the profession is facing.

"The insurance bodies that I deal with have made huge progress in recent years, and do represent their members and the public extremely well."

Mr Tracey also co-chairs the insurance and financial services All-Party Parliamentary Group (APPG), as well as the women and enterprise APPG, both of which are making huge strides going into 2019.

He explains: "In terms of the insurance and financial services APPG, we are putting forward our list of experts and speakers for 2019, as well as highlighting regulation that is coming into force and technological advancements across the sector.

"With technology moving at such a rapid pace, we need to understand it from the outset because at some point we are going to have to legislate on the laws that govern it or create a framework of regulation."

The women and enterprise APPG continues to grow and is on the verge of publishing its first report, with Mr Tracey involved specifically from a female entrepreneurship perspective.

"On every single measure, gender-diverse boards are more successful," he says, "so beyond the logical standpoint that 50% of the population is female and this should be realistically reflected on boards and in business, companies are far more profitable if you have a diverse board.

"It is so important to encourage bringing women into these top-level teams, [because] you bring in different angles and new viewpoints."

Mr Tracey also has significant involvement with the CII New Generation programme, with this year's group

contributing to the financial services APPG in January, as well as taking part in its annual parliamentary reception at the House of Commons.

"I am really excited about this," he says. "It is a great opportunity to share some forward thinking and have the chance to engage with these younger voices at the start of very promising careers.

"Harnessing their skills and ideas can be really positive for the APPG and in return they will receive some unique insight into how parliament works and how you can effect positive change.

"Politics really does have an impact on every aspect of all of our lives and if you have the knowledge of how to engage with that, it can give you a huge advantage."

Craig Tracey was born in Durham and attended the city's Framwellgate Moor Comprehensive School. His family come from a mining background in the northeast of England.

In January 2018, Craig was appointed as parliamentary private secretary to the Department for International Development and the Government Equality Office.

Craig has worked in parliament with charities Breast Cancer Now and Help for Heroes. He campaigns for improved road safety, protection of the green belt and support for businesses.