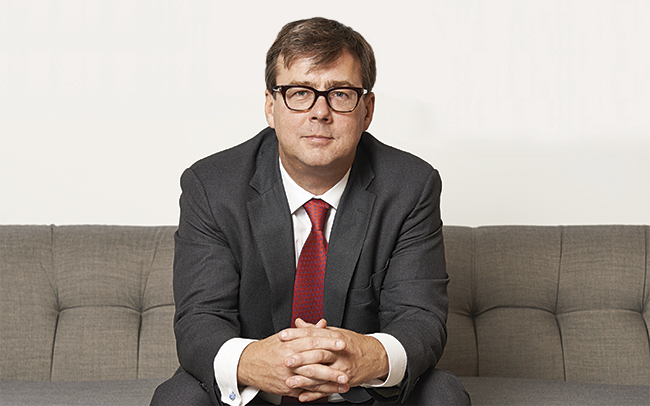 The evolution of the maritime sector means The Standard Club is always ready to grow and adapt, as CEO Jeremy Grose explains to Luke Holloway

Navigating an ever-evolving shipping market, overcoming environmental challenges, the uncertainty of Brexit and the recent announcement to withdraw from Lloyd's, all mean it is vital that Jeremy Grose, CEO of The Standard Club, remains ready to adapt.

"Recent years have seen huge developments in the maritime sector, both in terms of the technology used and the way in which businesses are run," Mr Grose tells us.

"The incidence of large pollution claims has reduced significantly in the years I have been in insurance. We now have much higher standards of operation alongside much lower levels of tolerance of negative environmental impact, oil spills and biological pollutants, which ultimately has led to a lower level of claims across the board."

Now the world's fourth largest protection and indemnity (P&I) organisation, The Standard Club is a specialist marine and energy insurer and has been managed by Charles Taylor since it was founded back in 1884.

Mr Grose was appointed chief executive in 2014, but in the years before becoming CEO, he was actively involved with raising professional standards within the maritime insurance sector.

"I was heavily engaged in the development of a professional qualification for the P&I sector in the early 2000s," says
Mr Grose. "We collaborated with the CII to establish a structured set of exams and modules which lead to a full, accredited P&I qualification. We wanted that to be seen as a solid, valuable qualification in its own right and today these modules now form part of CII learning. "In the same way that the CII aims to raise professional standards, we see those P&I qualifications as very much sitting within the environment of the CII."

Charles Taylor remains hugely committed to the development of talent today. In part, looking to recruit talent, but also realising that development of individuals forms an essential aspect of being able to attract the best talent to join the insurance sector.

"When people begin their careers, they see future development as essential to whether they want to join a company in the first place," Mr Grose says.

"Equally, it is vital from a retention perspective because if you want to keep the best people, you need to train, guide and challenge them. For us, it is hugely important and we focus a lot of time on the development and progression of each individual at our organisation -- it is key."

It is not just a focus on talent that the organisation is concerned with but drawing on a rich and diverse pool of talented people to strengthen their workforce. Mr Grose, who is openly gay, has always been an advocate for diversity in insurance and The Standard Club is actively involved with the Dive In initiative. "Our head of talent, James Shepard, is part of the Dive In steering committee and Oliver Hutchings, managing director marine, participated in a panel discussion at last year's event.

"We have a whole programme of activities at Charles Taylor around diversity and inclusion, and a forum engaged in developing the thinking of the organisation. The gender pay gap is key and one of the broadest areas in which there is inequality in the workplace, and insurance -- as a financial service -- is hugely affected.

"Positive change comes through sustainable action and we have to take a number of steps to make this happen."

So, what of the looming subject of Brexit on the maritime horizon? The Standard Club is a global organisation operating both in and out of the European Union and the firm has already made adjustments in preparation for the UK leaving the EU.

"We are certainly impacted by Brexit as many of our shipping clients are based in the EU," says Mr Grose. "The insurance subsidiary that we currently use is a UK insurer and we have now taken steps to set up an insurer in Ireland.

"We took the decision some time ago and an application was made to the Irish regulator, which we expect to be approved soon.

"Our members will continue to be fully supported by the additional insurer in Ireland, just a different one to who they are currently covered by. There will need to be some adjustment in the way we provide our services but, in any event, we aim to assure our members they will not be in any way affected."

Closer to home, The Standard Club has announced its withdrawal from underwriting at Lloyd's from 2019, ending
a syndicate established in 2015 to underwrite marine and energy risks.

Mr Grose cites conditions in the Lloyd's market as being far more challenging today than they were when the firm launched the syndicate and says it is the right decision to pull out now and allocate the capital to other initiatives.

"We are diversifying our business to provide an even stronger and more stable business to meet our members' core P&I insurance needs. Ultimately, it didn't appear to be the best platform for us to continue in operation. We could not be sure if we would have our plans approved and we decided to withdraw so we were in control of our own destiny.

"We will continue to focus on strong relationships with our clients, alongside strong knowledge and expertise about their businesses as the insurance sector evolves and technology continues to help us improve the way we do things," concludes Mr Grose.

Built on a strong foundation of trust and tradition, the ability to adapt to today's challenges remains as important as ever.

Education
Jeremy graduated from Kings' College, London in 1986 with degree in law and achieved MSc (Economics) in sea-use law, policy and economics in 1991.

Underwriting
He joined Charles Taylor in 1991 as claims executive and transferred to underwriting in 1992.

Going global
Jeremy held various roles in syndicates responsible for
US, Canada and Italy before posting to Greece as Eastern Mediterranean regional director in 2001.