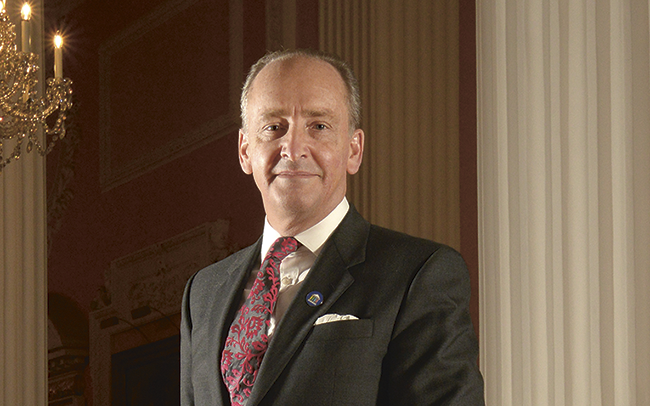 Luke Holloway speaks to the new Lord Mayor of the City of London as he looks beyond the pomp and ceremony, to the job in hand.

Many would have enjoyed the tradition and spectacle last November as Charles Bowman was sworn in as the 690th Lord Mayor of the City of London. For Lord Mayor Bowman, however, it is after the fireworks fade and the procession ends that the real hard work begins.

"It truly is a whirlwind of activity," says Lord Mayor Bowman. "One minute engaged in a centuries-old civic city ceremony, the next minute straight into the cut and thrust of what is a very modern role."

During his year's tenure, Lord Mayor Bowman will act as a key spokesperson on behalf of UK financial and professional services, which together employ more than 2.2 million people across the UK, including 1.4 million outside London.

"People may develop an image that the role of the Lord Mayor is a very civic duty, in reality that accounts for less than 5% of my time, and my primary responsibility is as a principle ambassador for the magnificent professional sectors that we have," he explains.

The three key objectives Lord Mayor Bowman has set out are: first, to help ensure the City secures the best possible Brexit deal -- preserving and enhancing economic prosperity; second, to rebuild public trust -- helping create a lasting legacy of better business, trusted by society; and third, to reshape the Lord Mayor's Appeal to create a 'Better City for All'.

"From a Brexit perspective it is really all about helping the city, Europe and our global partners secure the best possible deal, one that will preserve and hopefully enhance financial prosperity," he says.

"And every Lord Mayor comes into position with an appeal and we have shaped this around giving, youth and employability -- creating a fairer, more inclusive, more skilled, healthier city."

Strengthening public trust in financial and related professional services is an aim that very much aligns with the CII's Royal Charter. But why is there this trust deficit? Lord Mayor Bowman looks back to 2008 and the global financial crisis, which he feels was a catalyst for significant decline.

"Back then it was perhaps seen as a 'City' financial services-related problem. Ten years later, it is a global issue.

"In 2017, the Edelman 'trust barometer' reported the biggest-ever drop in global trust in institutions of government, media and business. There has been a paradigm shift in the way that business and society engage; the way people access the experiential growth in digital information that is available to them, is all part of this seismic shift in relationship.

"Trust is a complex issue. It arrives on foot and leaves on a galloping horse," he says. "We need to make sure financial and related services are on the front foot on this and to sustain our position as the global hub for professional services -- something we can be incredibly proud of."

A major part of Lord Mayor Bowman's campaign is the launch of the 'Business of Trust' programme -- a report that examines years of activity invested in ethics, value statements of professional bodies, institutions and trade bodies, as well as discussion with groups of citizens who broadly reflect society.

This was then distilled into five guiding principles on trustworthiness. Lord Mayor Bowman explains: "We began by convening a series of day-long citizens' juries in London, Nottingham and Edinburgh, asking them questions on the subject of trust.

"The beauty of it was that what society and what the business community said reconciled very neatly and were almost direct replicas of one another. This is now our base document to spread our message of trust. We have a really exciting programme, which is being rolled out throughout this year and beyond."

There is huge focus from the CII on attracting talent into the insurance profession through apprenticeships and to ensure financial services attract the skills they need for the future.

"There isn't a single silver bullet you can load into the gun and fire," says Lord Mayor Bowman. "It is the deeds, behaviours and actions of us all that will give rise to the diversity and inclusivity of talent that is available to us.

"I recently hosted 220 students from four London academies for the Livery Academy Awards, with each group making an presentation introducing a business model, before receiving challenging questions from the judges and audience.

"I came away recognising the immense talent that we possess and it is our job to get that talent aspired and engaged into insurance and financial services.

"We are world leaders in risk management and the more we can do to promote that and innovate within that space, the better it is for the financial and professional sectors and the greater the opportunities for us all."

To read the Lord Mayor's report on the 'Business of Trust' and get involved, visit: bit.ly/2Fgr48B