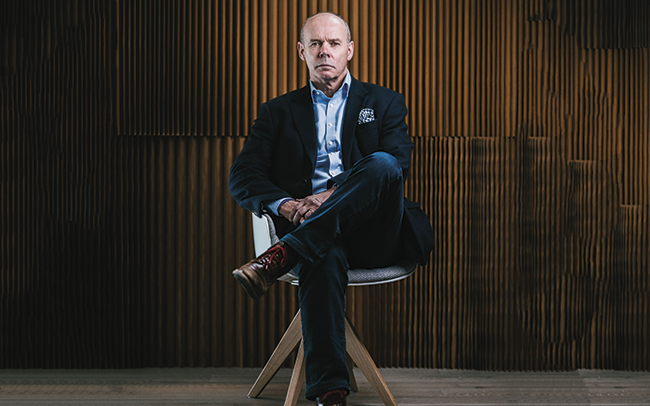 Rugby World Cup-winning coach Sir Clive Woodward speaks to Luke Holloway offering an insight into his methods and how they apply to the business world.

Sir Clive Woodward's convictions have served him well. His relentless determination and forward-thinking work methods have helped him and those around him to the pinnacle of their profession.

Famously leading the England rugby team to victory in the 2003 Rugby World Cup, he not only guided and inspired players on a personal level, but implemented coaching methods and data analysis never before seen in the world of rugby and at the very cutting edge of sports science.

Sir Clive coached England between 1997 and 2004, before moving onto the British and Irish Lions in 2005. But despite his remarkable achievements, he argues there is no great secret to leadership. "You don't get trust and respect just because you're a leader, you earn that through the quality of what you do," he says. "I believe in throwing everything at a task, every ounce of effort. Work as hard as you possibly can and people will follow you."

Being a good boss certainly does not include dictating every decision and for Sir Clive, it is important that people know the team goals, but crucially, the reasons behind what they are working towards. "Take people on that journey with you. Don't just tell people, 'this is what we're going to do', and that's it. You have to bring them in and tell them why you're going to do it this way and when they have an opinion, it is important to listen.

"If people understand why what they're doing is going to make the overall performance better and the team more successful, people will work better. The 'why' is the most important thing."

TALENT AS A STARTER

New talent is something the insurance profession is now placing huge emphasis on and both finding and developing talent has been key to Sir Clive's success.

"A great team is made up of great individuals. Once you've got those individuals on your team, what can you then do to make those people better?" he asks. "You need individual training plans -- so it's not the same for everybody -- and really focus on improving every individual. No matter how talented someone is, you should always
aim to make them better."

Having a team of diverse individuals is also vital and not just as a tickbox exercise, but to harness different perspectives to create real benefits to a business. "Diversity is incredibly important and often not understood as it should be," says Sir Clive. "For me, it is all about diversity of thought. The more diverse your team is in terms of gender, ethnicity, culture, you'll get different ideas and variety of thought -- and that makes you a better team."

Now a successful sport and business consultant, there is an incredible amount that Sir Clive feels can be translated from the field to the workplace. Not least the art of dealing with pressure.

One method he teaches is 'TCUP' -- Thinking Correctly Under Pressure, which means rather than ignoring pressure or hoping it won't affect you, being ready for it.

"What is pressure?" he asks. "If someone walked in with a knife, that's pressure. And you've got a better chance of handling a situation if you have prepared yourself mentally and thought through that situation step by step beforehand," he says.

"No matter how experienced you are, people do still freeze or 'choke' -- it can happen. But the more you plan for moments of pressure and the defeats in life, the better you can handle them.

"It is important to talk about losing because it is going to happen, it's part of it. You need to be prepared for it and when the time comes you know how to react positively -- and that is never a weakness, it is a great strength."

Though known for great victories throughout his career, Sir Clive is no stranger to failure and he is adamant that losing is not only nothing to be ashamed of, it is something you should use to your advantage and actively prepare for.

"I've probably failed more than I've succeeded. You learn more about yourself when you lose than when you win," he says. "There's a famous quote which I love: 'I never lose, I either win or I learn'. Yes, you may have failed, but you need to take something from that, life goes on and another opportunity will come around.

"The more you capture and use knowledge, looking at why things worked or didn't work, the stronger you will become. Asking for help is also very important. But if you fail, slam the door and don't look at why things went wrong, you won't progress. Never lose, just learn."

High performance: Clive is the director of sport for APEX 2100, which aims to become a world-leading high altitude performance centre, based at 2,100m in Tignes, France.