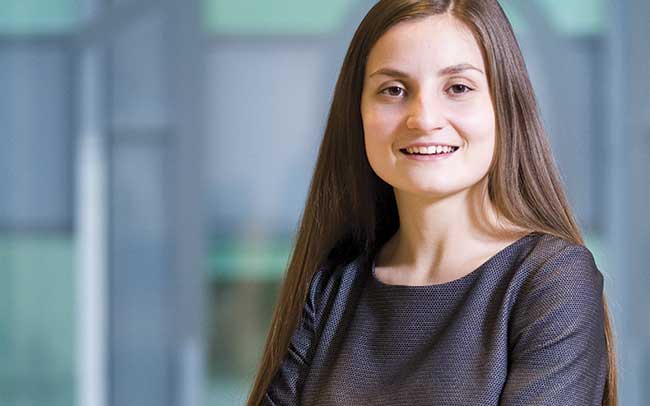 The Journal talks to Samantha Eustace, winner of the Insurance Times Apprentice of the Year award, about her journey in the profession so far

TELL US ABOUT YOURSELF AND WHAT YOU DO

I'm 19-years-old and I am an assistant underwriting services specialist as part of the 'Trailblazer' apprenticeships programme.

My team covers casualty lines, financial lines, property and marine. Having such variety has been fantastic for me in terms of my development. I've learnt so much about so many areas in a short space of time and that has made me feel really well equipped for the next steps of my career.

HOW DID YOU FIRST BECOME INVOLVED WITH APPRENTICE PROGRAMME?

At the beginning of last year I submitted my CV through a website called www.getmyfirstjob.co.uk, which provides financial services apprenticeships. They put me forward for a market underwriter role with Zurich and I was offered a place as part of a group assessment centre, which was the very same day I was moving house!

I decided to go for it as it was a great opportunity and I'd never even had an interview before. When I went along, I was the youngest candidate in the room and the only one who hadn't finished school; to be honest I was absolutely terrified! I was due to get my results for my A/S-Levels at the beginning of August and that week I received a phone call from the recruitment team saying I'd been offered the job.

WHY SHOULD ANYONE PICK AN APPRENTICESHIP?

The most important thing to do in the beginning is understand the detail of exactly what you're getting into, because it isn't right for everyone. Though I honestly believe that what you can get out of an apprenticeship can be more beneficial than going to university. I've now seen it from inside the industry and increasingly companies aren't just looking for graduates as they also want young people they can nurture from day one. I'm now finding I have some of the same opportunities as graduates coming into the profession but they're a few years older than me because they went to university. There are so many options so my advice would be to really assess them all and don't just jump in and do what others tell you.

TELL US ABOUT THE AWARD AND HOW YOU CAME TO BE NOMINATED?

To start with I didn't know anything about it! Alison Maskell, a member of our HR team who oversees early career programmes, approached my team manager and said she'd like to put me forward for it. When I was initially told about it, I just thought it was an apprentice event, focused on development and networking. However, when I arrived at the venue I found out it was a competition. As I am naturally quite a competitive person (in a nice way!) I wanted to prove myself, so I just went for it.

The first stage was giving a group presentation. I worked really hard to make sure we pulled together as a team, that we listened to each other's ideas and encouraged every team member to be involved. I also made sure it was fair and that everyone had an equal role. Then there was the public speaking aspect and that's really something I've never shied away from! I put my all into it -- thankfully I stood out and was absolutely delighted when I won.

WHAT DO YOUNGER PEOPLE THINK OF THE PROFESSION?

I don't think there is much of a perception at all about the profession from young people, apart from adverts on TV and knowing that our car insurance is going to be ridiculously high when we start driving! Then once you hear about it as a career I think people worry it is going to be boring and you'll be sitting at a computer all day, but the reality is totally different. It is so diverse and interesting, there are actuarial roles which are very maths based, claims roles which involve dealing with individuals and families should a claim arise and there are management style roles.

Young people that want to get into business automatically think of something like banking and don't consider insurance, but they really should because there is so much breadth and variety on offer.

WHAT HAS BEEN THE BEST THING ABOUT YOUR APPRENTICESHIP?

Throughout my whole journey my management team have been fantastic in guiding me and giving me the freedom to develop in areas that I felt I needed to.

I've also pushed myself to get involved in extra-curricular work and part of this has been charity work. We did an apprenticeship charity challenge, raising money for the children's cancer charity CLIC Sargent. This then inspired me to organise a Christmas charity project for our team and we were able to go back to where the children stay while they are receiving treatment and take them presents and decorate their rooms. It was really amazing and such a great thing to be able to do alongside my professional development.

The apprenticeship really is what you make of it and the more you put in the more you will get out of it. I've managed to get involved with as many aspects of the business as I can. This has included core tasks, team tasks within my department, meeting new people around the company, sports, socialising - as much as I could fit in. It's been a fantastic experience and the perfect start to my career in insurance.

Samantha attended Broxbourne Secondary School and achieved 5A*s and 7As at GCSE level. She then studied politics, economics, maths, philosophy and ethics before joining Zurich.

She spent a week at the New York branch of Morgan Stanley last year viewing wealth management HR, followed by a day in the Canary Wharf office.

This year she took part in the Zurich gender inclusion initiative, Women's Innovation Network, as well as running a marathon and half marathon for Cancer Research and Zurich Community Trust.

Samantha aims to keep a broad horizon of opportunities in the profession with ambitions to progress into a managerial role later in her career.