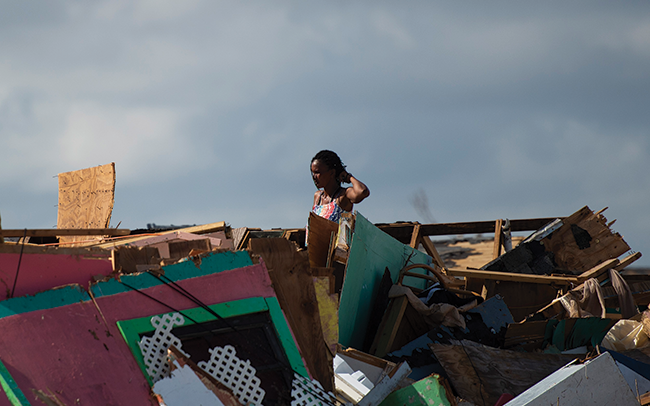 Hurricanes, typhoons and wildfires have dominated the catastrophe list in 2019, while manmade disruption has come from hundreds of strikes worldwide. Liz Booth counts the cost

While you might be forgiven for wanting to leave the UK and the Brexit latest behind, 2019 has not necessarily been the year for travel.

The implication for travel insurers has been huge, as commercial travellers and holidaymakers alike have had their plans seriously disrupted with every likelihood of claims to follow -- all at a time when travel insurers are facing tough market conditions.

While the hurricane season has not been the worst ever (though as we go to press there is still time for that), it has been remarkable in other ways.

Most notably, Hurricane Dorian -- which travelled so slowly and lingered with such devastating impact over the Bahamas.

But even before the estimated insured losses from Hurricane Dorian to the US of between £395m and £1.2bn (according to RMS) land, other hurricanes have hit the US, including Hurricane Barry with its estimated losses of almost £400m. The RMS loss estimate for the US reflects property damage and business interruption to residential, commercial, industrial and automobile lines of business.

The implication for travel insurers has been huge, as commercial travellers and holidaymakers alike have had their plans seriously disrupted-¦

However, the Atlantic Basin is not the only area to have faced severe storms this year. In Mozambique, two massive cyclones chose the same path as they swept inland -- the first time that has happened in recorded history.

The cyclones did not cause so much in the way of insured losses but devastated countries that are far less able to withstand such shocks to their economies, including Mozambique, Malawi and Zimbabwe. In the better-insured South Africa, insurers have been reeling from the claims from severe hailstorms and fires.

And Asia has not been immune. A powerful typhoon passed over the Korean peninsula in September, leaving five people dead and 460 houses damaged or destroyed in North Korea, according to state media.

Two powerful typhoons have hit Japan in recent months, causing multiple deaths and flooding large areas. Most notably, Typhoon Hagibis was one of the most devastating typhoons ever to hit Japan. It flooded huge areas of the country, destroying homes and commercial property, for example in a train depot in Nagano 10 high-speed ("bullet") trains were submerged. Each train has been valued at £23m.

Indeed, airlines have been having a pretty bad few months. The summer in Europe brought strike misery to hundreds of thousands of passengers. Staff at Heathrow Airport threatened action, while a one-day strike by British Airways pilots is reported
to have disrupted journeys for 180,000 passengers. Thomas Cook also collapsed leaving around 150,000 people either stranded abroad or with their holiday cancelled.

To compound the UK problems, Air France staff have been on strike and the annual air traffic controllers' strike also affected all those overflying France in August. KLM staff too have been taking action -- in two-hour slots but causing disruption throughout the day -- and Ryanair has also been striking through August and September.

Although the Thomas Cook collapse is unlikely to impact insurers, UK newspaper the Evening Standard did spell out the likely compensation for consumers from a strike. It explained that airlines are not obligated to pay compensation after a strike as it is termed an extraordinary event; however, after strikes in 2018, Ryanair was forced by the Civil Aviation Authority to pay between €250 and €400 per passenger.

The Association of British Insurers (ABI) was also reminding consumers: "Travel insurance may cover additional lost accommodation costs and other expenses if booked prior to the dates when the strike days were announced.

"Where this cover is provided, it will usually apply where any refunds have not been obtainable from any other source. Customers should speak to travel providers, accommodation providers and credit card providers first."

And to top that all off, there is terrorism.

British Airways and Lufthansa flights to Egypt were suspended briefly earlier this year after warnings of a possible threat. And after the bombings in Sri Lanka, people were warned against all but essential travel.

Again, the ABI has been advising consumers. It stressed: "If you travel against government advice, then you could be putting your travel insurance cover at risk. This is because policies expect you to take reasonable care and not expose yourself to unnecessary and avoidable risk. Check with your travel insurer if the reasons for any travel would impact on your cover."

22% growth in the average travel insurance claim value between 2013 and 2017- Source: Mintel

All of which neatly brings us to travel insurance.

A recent Mintel report pointed out: "Travel insurance providers operate in a tough environment, with strong price competition, rising claims costs and uncertainty over Brexit dampening demand for overseas travel. Maintaining profit margins is a priority for many suppliers but remains challenging."

Overall, it said that following several years of decline, total gross travel insurance premiums increased by an estimated 9% in 2017, to reach £769m. Members of the ABI, which includes three of the largest four providers, accounted for £519m of this total.

In comparison to 2017, total premium income barely grew in 2018, reflecting a slowdown in the foreign-holiday market. Total gross premiums are projected to have grown by 1% to £780m.

However, there was some good news for the travel insurance market. Even before all the events of this year, the Mintel report stated: "Looking solely at ABI data, the average multi-trip premium increased from around £30 in 2013 to £40 in 2017. The increase reflects a hardening of rates in the affinity/packaged sector, along with rising claims costs over the past four years."

Of course, there is always a downside and the Mintel report also found: "The average travel insurance claim value grew by 22% between 2013 and 2017 (rising to £756 in 2017), driven mainly by rising medical expenses inflation."

Back to this year and a likely uptick in demand for insurance. Mintel found 80% of people who have been abroad consider cover for airline/supplier failure important, but only 33% are prepared to pay extra for it. Cover for delays and disruption caused by unforeseen events is similarly popular with most people, but only 24% would pay extra for it.

It will be interesting to see whether consumer attitudes change in the wake of a year of such travel disruptions, and whether they take a harder look at the smallprint of their existing policies. 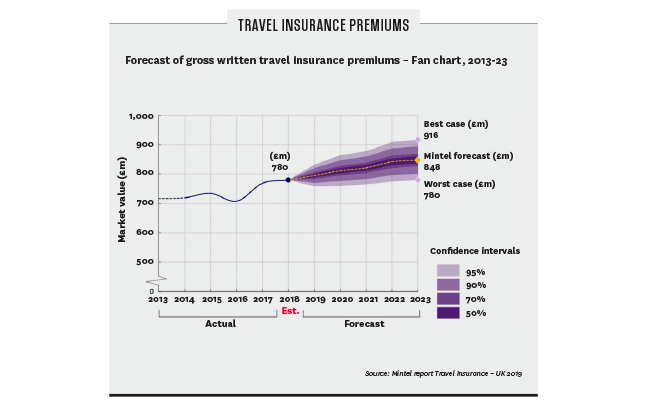