RISE OF THE ROAD BOTS 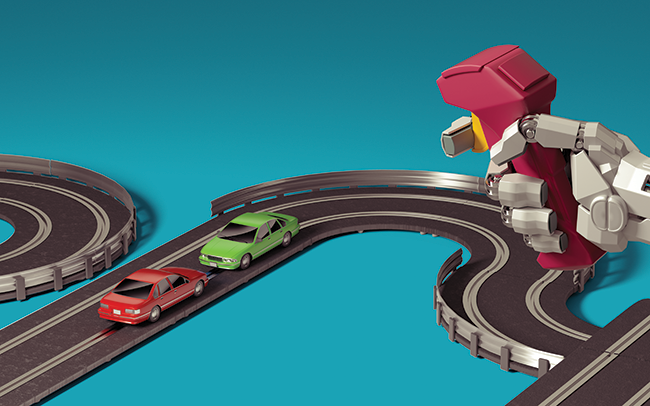 Often, people discuss autonomous vehicles as if one day we will be driving our own cars and the very next day the machines will have control.

This is set to provide plenty of challenges for drivers -- and their insurers.

By the end of 2018, industry analysts EV-Volumes were reporting that plug-in vehicle sales in Europe reached 408,000 units in 2018, 33% higher than in 2017. There are now more than one million electric cars across Europe.

With the European Environment Agency (EEA) recently concluding that electric cars are "clearly preferable to petrol or diesel cars", it is no surprise the market is growing.

Andreas Unterstaller, the EEA's transport and environment expert, says: "The EU as a whole has been channelling billions of euros into relevant research for the last decade and is pushing for a rapid expansion of the charging infrastructure. It is also investing heavily and promoting alternative fuel infrastructure, which includes electric-vehicle chargers, especially on the main European transit corridors.

"Finally, the EU is making common rules and standards for electric vehicles and the charging infrastructure, so you can move about freely in Europe."

Elsewhere, Munich Re has just announced insurance for battery performance, albeit aimed at large projects in the energy sector. Peter RÃ¶der, member of the board of management at Munich Re, says: "The ability to insure battery performance is a key piece of the puzzle in decarbonising our energy sector. For the first time, battery manufacturers can insure against the risk of their products not delivering as promised."

For insurers, the development of insurance products around this emerging technology is key. There has been a spate of fires involving battery-powered vehicles and there are questions around the weight of the batteries, should a vehicle be involved in an accident.

Insurers and insureds also have questions about the experience of drivers, repair shops and even cargo handlers of these batteries, which all carry highly flammable lithium.

Liability insurers, marine cargo insurers and even property insurers are being urged to check policies to ensure they fully understand the risks to which they are exposed, including:

However, despite these challenges, the market for electric vehicles is growing and insurers are being asked for workable solutions.

But what of autonomous vehicles? Experts continue to say it will be another decade before autonomous vehicles are commonly out on the road. The questions seem to be not about the technology but around the societal issues of vehicles choosing between another vehicle and a pedestrian if an accident looms, and also around the thorny issue of liability.

Insurance lies at the heart of this conversation, it seems.

McKinsey says that for robo-taxis, the first at-scale commercial operations could be available as early as 2020-2022, while platooning -- groups of trucks closely following one another -- could arrive any moment, offering more efficient fuel consumption due to aerodynamics.

In fact, there are trials involving, for example, lorries carrying heavy cargos along a tightly defined track. One such experiment in Singapore has allowed the cargo-site owner to add massively to the loads carried from one end of the port to another.

McKinsey suggests that the gradual introduction of the technology will mean increasing 'clever' cars. "In the near term, advanced driver-assistance systems (ADAS) technology will be important as the market prepares for full autonomy and seeks to increase profits from AV-critical technology capabilities. The market for ADAS could double by 2021, reaching $35bn in revenue," states the management consulting firm.

However, the Transport Research Laboratory (TRL), a global centre for innovation and transport systems, has yet to be convinced that autonomous vehicles will deliver all the expected results.

It says public perception surrounding the impact of automated vehicles from a road accident perspective needs to be reviewed. Viewpoints including that road fatalities will reduce to zero in an autonomous world are not only false, they need to be analysed and answered with fact-based, real-world information and research.

Rob Wallis, CEO for TRL, says: "The three current barriers to automated vehicles becoming a reality are the insurance industry, the regulatory environment and public perception.

"People want to know these technologies are safe, [and] if they will decrease accidents and provide societal benefits surrounding road capacity and congestion.

"Automated vehicles will make roads safer and as a result, there will be a reduction in deaths and serious injuries, but it will take time and it won't ever be perfect. There will never be zero deaths on roads in any future that vehicles and pedestrians share the same space -- that's the real societal challenge people have to get their heads around."

TRL concludes that some challenges the UK will face are:

So, it is no surprise that the UK government is looking at this.

People using driverless cars should still not take their eyes off the road, if they could be expected to take over the vehicle at short notice in an emergency, the International Underwriting Association (IUA) states. Unless a vehicle is highly automated, users should be banned from performing other tasks and legally required to monitor their journey.

The Association gives its views in a response to a consultation exercise on the future of automated vehicles, undertaken by the Law Commission.

Chris Jones, IUA director of legal and market services, says: "It is essential that an effective framework is established governing their operation. Insurers have a vital role to play in this process.

"For liability to be established and claims rapidly settled, vehicle data must be recorded and made available. This will include, for example, the status of the automated system, whether engaged or disengaged, the speed of the vehicle and any camera footage from the time of the accident. It is imperative that innocent victims should not be penalised due to insufficient data being available about the role of automated technology in relation to an accident."

Mr Jones adds:
"As information expands and usage grows, we are likely to see potential vulnerabilities highlighted and new risk areas emerge. We anticipate that the technology will be capable of self-reporting system errors, defects and other issues affecting road worthiness.

"Comprehensive data recording and collection will go a long way to ensuring risks are adequately covered and any legislation remains relevant," he concludes.

However, lawyers at Kennedys say the government needs to do much more to bring stakeholders together to successfully implement autonomous vehicles in the UK, stating:

"We very strongly believe that the government needs to work centrally to further facilitate meetings and communication between various stakeholders, and in particular between insurers and manufacturers."

Kennedys also says that the role of the "user-in-charge" -- the person operating the controls of the automated vehicle when not in autonomous mode -- must be made clear now and cannot wait until the technology further develops.

"The key issue here is being very clear as to when and at what point a human user-in-charge becomes liable from both a criminal and civil perspective for the operation of the [autonomous vehicle]. This will be heavily dependent on evidence as to how and when the autonomous systems took control, whether they should have taken control, and how and when the user tried to take back control," state the Kennedys lawyers.

The firm is urging caution when assigning criminal liability to a user-in-charge for failing to take steps to avert the risk of serious injury: "Assessing whether the user-in-charge could have taken steps to avert a serious injury/accident would be highly fact-sensitive. We believe the onus on the user in those circumstances would be far lower compared with the driver of a manual vehicle."

Kennedys says legislation should be amended to place the onus on manufacturers to ensure, by design, that autonomous vehicles cannot start their journey until safety-critical software updates are uploaded or it is confirmed that such software is already up to date -- in much the same way that many vehicles will not allow the driver to set off if their seat belt has not been put in place.

It also says that manufacturers will need to ensure that consumers have a clear understanding of what the autonomous vehicles and their automated features can and cannot do. In addition to mandatory training when users first purchase a new autonomous vehicle, it also calls for training and skill checks to be introduced to the core driving test for users in charge.

Whatever the outcome of the Law Commission consultation, it is clear that the future of driving is set to change -- and that much of that change is already underway.

The questions for insurers are clear: can the sector provide the workable and affordable policies that the motor industry is looking for? And are insurers prepared to develop policies for the motor manufacturers that move the liability of an accident from the individual to the corporate?

Time will tell, but in the meantime we are all racing towards a future in which the computer controls the vehicle, rather than the driver.