UK MOTOR IN NEED OF A TUNE-UP 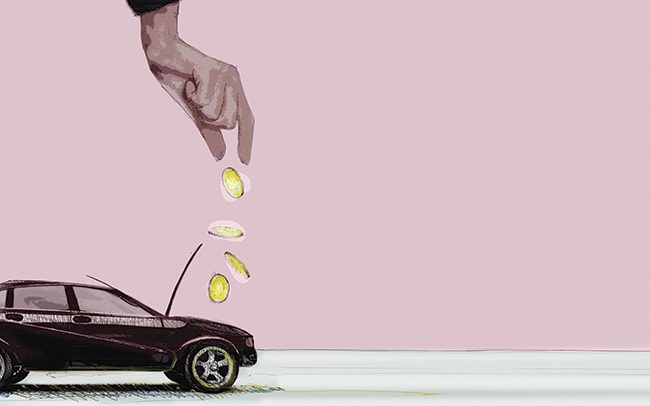 The latter has only just been announced and follows a super-complaint lodged by Citizens Advice. Motor is one of a number of classes of insurance to be investigated after the complaint by Citizens Advice that there is a "systematic scam". It claims British consumers are losing £4.1bn annually to the so-called 'loyalty penalty', with eight in 10 people paying a significantly higher price for sticking with their current provider.

Meanwhile, the Brexit debate rumbles on and Hugh Savill, director of regulation at the Association of British Insurers, reports: "The government and motor insurance bodies across Europe have already agreed a plan to keep the UK in the EU's car insurance zone -- the timeframes simply need rubber-stamping by the European Commission.

"We hope the Commission gets on with this as soon as possible to protect motorists and haulage operators, here and in Europe, from the unnecessary hassle and cost of having to return to a Green Card system."

Potentially a bit of good news for a market that is facing so many challenges.

Meanwhile, early in September, the second reading of the Civil Liability Bill was heard in the House of Commons.

Mark Hemsted, a partner at Clyde & Co, says: "This Bill is all about reducing the cost of motor insurance for the British public.

"The ultimate definition of whiplash will have a major impact on this legislation's ability to stamp our fraud. If it's not broad enough -- for example, it only includes neck injury -- anyone with a bruise or scrape elsewhere will use this to avoid the proposed tariff-based systems of awards."

Rob Williams, of Weightmans, adds that insurers will be closely watching the plans to monitor the impact of the Bill on the insurance industry and on UK premium prices, but so will others. "If one amendment is adopted, the Treasury will be able to empower the FCA to compel insurers writing third-party personal injury cover after April 2020 to provide information aimed at assessing the impact of the Bill."

He explains that the specific information in question is indemnity spend (how much insurers pay out in relation to claims, inclusive of legal costs), premium income and premium prices. In each case, the proposed requirement is that insurers provide information for a period of three years after the reforms, covering both the actual figures and what they consider the figures would have been but for the impact of the reforms.

"That proposed amendment will come as no surprise to insurers," Mr Williams says. "The focus on indemnity spend, premium income and premium prices is also predictable and understandable.

"What the insurance industry will draw comfort from is the requirement that they provide information about what they consider the trends would have been but for the introduction of the reforms.

"That requirement is crucial, as it will allow insurers the opportunity to put forward comparison figures that are suitably sophisticated and take account of factors such as premium reductions ahead of the implementation of the reforms, derived from predictive pricing, as well as other factors influencing premiums, such as insurance premium tax, repair costs etc."

But he also warns: "The danger for insurers is that a less sophisticated approach, simply tracking post-implementation premium levels and presuming claims spend to be the sole factor influencing premium prices, would lead to a skewed and inaccurate assessment of the impact of the reforms."

Mr Hemsted adds: "The sum at which the small claims limit is set is also crucial. Currently it's £1,000, so claimant solicitors can recover their costs from the losing party on relatively small claims. If the sum is raised to £5,000, claimant solicitors have a much bigger hurdle to leap before they can recover costs. That could deter claims -- or it could lead to a sudden increase in the number of higher-value claims as it clearly creates an incentive to go large, so to speak."

The cost of claims and the risk of fraudulent claims remain crucial. Iain Stark, a partner and costs specialist at Weightmans, has some good news on that.

He explains that two landmark Court of Appeal rulings regarding Part 36 offers and their implications for recoverable costs provide welcome clarity for insurers.

Mr Stark says: "For some years, the sanctity of fixed costs has been under threat. Part 45 of the rules governing civil claims states that for relevant claims, the fixed costs regime can be departed from only in 'exceptional circumstances'. In those instances, claimants can seek to recover indemnity costs based on hourly rates, rather than the fixed costs.

"Costs recovered on an indemnity basis are often significantly higher than fixed costs and this has led to an opportunistic approach from the claimant community where Part 36 offers are concerned."

The good news, he says, is that "thankfully, two landmark cases heard by the Court of Appeal have definitively clarified what counts as 'exceptional circumstances' -- and perhaps more importantly, what doesn't".

The Court of Appeal allowed the appeals in both cases. The judgment also confirmed a number of other important points for insurers, namely that the purpose and rationale of the fixed costs regime is to provide certainty and to ensure that both sides begin and end proceedings expecting that the fixed cost is all that will be recoverable.

Research by LexisNexis Risk Solutions has found (in a survey of 1,500 policyholders) that 84% take some time to check what is covered by their policy at the point of renewal and 58% consider adjusting cover at this point. Some 13% only look at the cost and just 4% let the policy renewal happen automatically.

However, the research also reveals a "worrying picture" of data manipulation in insurance applications.

LexisNexis warns: "This not only renders policies potentially invalid and consumers exposed, it results in losses for insurance providers who may pay claims on policies without ever knowing that the risk was misrepresented."

Some 59% of the motorists report that they think insurance providers consistently charge too much for motor insurance.

However, more alarmingly, seven out of 10 of the motorists surveyed admitted that they believe it is acceptable to alter details they provide, to manipulate the quote and obtain a lower premium.

â 84% of respondents used a price comparison website
â 15% of purchases were made through cashback websites
â 24% buy their policy over the phone (a rise of 4% since 2015), including more than one in three of those aged 55 and over.

When it comes to claims, according to Aon's Reinsurance Solutions: "In the new Ogden discount rate environment, 2017 data suggests that the majority of large claims are settling at an estimated discount at and above 1%, with very few settling at -0.75%.

"The firm's data show that there is emerging experience of lower large-loss claims inflation, compared to historic levels of 5%-7% when the Ogden discount rate was a consistent 2.5%.

Richard Evans, head of UK motor within Aon's Reinsurance Solutions business, says: "The Ogden discount rate has caused us to re-evaluate how we consider large motor insurance losses for the purposes of insurance and reinsurance, presenting many challenges in terms of pricing and reserving strategies. Given the potential for further amendments to the Ogden methodology, this will remain high on insurers' and reinsurers' agenda."

Aon's findings mention the influence of social media and changing times, thanks to new technology. So, it is no surprise that there is more change ahead in that context too. Insurethebox has welcomed a recent EU law requiring cars to be fitted with an e-call button that alerts emergency services in the event of an accident.

However, it says eCall will only be standard on new cars manufactured after 1 April 2018; it will not be retrofitted to older cars or existing models, leaving potentially millions of motorists without access to this technology -- especially young drivers who stand to benefit the most, but whose budget will not stretch to a new car.

According to new research by Insurethebox, more than 70% of high-impact alerts recorded by its Accident Alerts service last year were triggered by 17- to 21-year olds.

More than 100,000 Accident Alerts have been triggered since Insurethebox launched in 2010 and its most recent analysis shows that the emergency services were called 145 times during 2017.

The new research from Insurethebox also revealed that vehicles on a 30mph road are six times more likely to trigger these high-impact alerts, which indicate the driver's possible involvement in a collision, than on a motorway.

Additionally, nearly half of alerts (43%) are recorded after 5pm, with drivers six times more likely to require emergency services between midnight and 5am. In 2017, Insurethebox received the highest number of Accident Alerts in December.