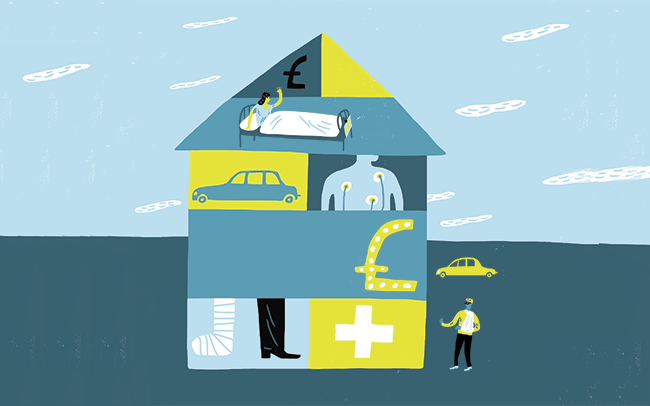 How will the industry address extra costs after an unexpectedly large change to the compensation payment discount rate?

We have begun to expect the unexpected from UK Budgets these days -- think back to the radical pension changes just a couple of years ago, for example.

Campaigners had long been arguing for changes in the so-called Ogden rate, the mechanism that allows courts to properly price catastrophic injury compensation to protect the claimant well into the future. The proponents of change had said the low interest environment had left claimants with potential shortfalls in their compensation because they could no longer rely on investing the money to keep up with changes in living costs.

However, after six years of calling out in a seemingly barren wilderness, it was still a surprise when the UK Chancellor Philip Hammond not only announced a change but a sea-change.

After an immediate furore, the Ministry of Justice then launched a six-week consultation to decide whether to change the legal framework that sets the 'discount rate'. There will be no immediate change, however, as the consultation runs until 11 May and the government will publish a response to that consultation by 11 August.

Mark Burton, a partner at law firm Kennedys, says: "This consultation is looking to settle the questions around the discount rate for the long term and raises many important points of principle. By opening up the possibility of more regular reviews, for example, it suggests creating a more flexible and nuanced regime that can move better with the times.

"Importantly, it is not about denying injured people the compensation they need. At the same time, claimants should not be overcompensated, especially when it is public bodies, such as local authorities, which are paying."

As Fitch Ratings explains: "Reducing the rate has significant implications for motor insurers because bodily injury claims represent around half of total motor insurance claims costs.

"Many insurance payments are intended to provide compensation for several decades, so small changes in the rate have a big effect.

What is the Ogden Rate?

When a personal injury claim occurs and a lump sum is paid as compensation for life-changing injuries, the amount awarded is adjusted to compensate for the amount of interest the claimant can expect to earn by investing it to ensure that they are never undercompensated or overcompensated. The amount by which this is adjusted is known as the discount rate, but is often referred to as simply the Ogden rate. It is applied by the courts to an amount calculated to cover loss of earnings and any care costs for claimants. Until recently, the Ogden rate has been set at 2.5%, meaning that for every £1,000 of loss calculated, the insurer will pay out £975. The claimant would then be expected to earn 2.5% interest a year, earning them the full payment they are due.

For example, a 30-year-old woman who needs £50,000 a year to cover care costs would receive around £3.8m using the new rate, compared with a lump sum payment of £1.5m at the previous rate." For the insurance sector, the past few weeks have produced a real dilemma. As soon as Mr Hammond pronounced, the industry started crying out from the hilltops about the dramatic impact this would have.

Millions would be lost off their bottom lines, they cried, and the only remedy would be to ramp up premium costs for all.

The Association of British Insurers (ABI) was quick to come out and announce insurers had started the first of several expected rate increases for UK liability insurance.

Travelers became one of the first insurers to book reserve increases in the first quarter to account for the change. The US-based firm says its first quarter results will be hit by a $62m pre-tax increase to prior year loss reserves.

A number of other insurers have already publicly confirmed that premiums are going up as a result of the decision, warns the ABI. These initial premium rises are likely to be part of three waves that will take place between now and the beginning of next year, it suggests.

Unless the UK government changes its approach, the second and third waves will likely follow reinsurance renewals in early July and at the beginning of 2018, the ABI adds.

Forgive me for asking, but isn't pooling what insurance is about -- that we all pay something that adds up to a big pot to compensate those less fortunate?

The argument against having to increase premiums is hugely valid, however, as any premium increase brings the risk of a corresponding rise in the number of those who choose simply not to insure at all.

But some in the sector are calling for a better balance. Managing director of Arag, Tony Buss, suggests of the immediate sector outcry: "Any sympathy or even recognition that the reform had been made to help those whose lives have been transformed by misfortune, was hard to find."

He acknowledges that the formulae used to compensate victims could be flawed and "certainly the suddenness of the announcement doesn't seem to have helped anyone, but the clamour to decry a decision that was made solely to make justice that little bit more just does not reflect well on our profession".

Time and again, says Mr Buss, key industry figures have spoken about a public perception of the industry, which sees profit coming before people, sales before service and claims to be declined wherever possible: All 'corporate' and not much 'social responsibility'.

He warns: "By declaring the discount rate reform 'crazy' because it will cost motorists an extra £75, the ABI has done nothing to improve public perceptions of insurers and left the impression of an industry that may be shallow, self-interested and heartless."

However, for the less advantaged, insurance can be an expensive luxury. ABI research shows that in 2014, insurers uncovered 212,000 attempted dishonest applications for motor insurance, up 18% on 2013 and equivalent to more than 4,000 every week. Added to that, the Motor Insurers Bureau reports 145,000 vehicles were seized by police for not having insurance in 2016.

So clearly, no one wants to add fuel to that situation. Huw Evans, ABI director general, believes the Ogden changes were "based on pressure from claimant lawyers,
poor legal advice and an outdated formula that does not reflect the choices available today for a prudent claimant".

He adds: "We must move urgently to a fair and modern formula for calculating compensation that works for claimants and insurance customers alike.

"With further pain to come in June when Insurance Premium Tax (IPT) will go up from 10% to 12%, it is more important than ever that government brings in a more sensible discount rate as soon as possible."

There are other implications for the industry. Fitch Ratings believes UK motor insurers will face a short-term hit to earnings from the increase in lump sum reserves and higher reinsurance costs.

It says: "Insurers may also want to rebuild depleted reserve buffers, which could create a further drag on profitability for the next couple of years. But firms should be able to pass on these higher costs to consumers and we therefore do not expect any significant long-term deterioration in the credit profiles of rated insurers."

As already discussed, the consumer view, whether right or wrong, is paramount.

Julia Graham, deputy CEO of Airmic, which represents commercial insurance buyers and risk managers, comments: "Airmic supports the need for the discount rate to reflect a fair compensation system, but we are deeply concerned about the timing and scale of the change announced yesterday and the impact on businesses.

What claims will the decreased rate apply to?

The change in the Ogden rate will be applied to all personal injury damages awarded on or after 20 March 2017 -- this will include pre-existing and future claims. It will have
a significant effect on the way personal injury compensation claims are calculated. The ABI expects that up to 36 million individual and business motor insurance policies could be affected.

"Not only has the industry not been appropriately consulted, the decision is based on a formula in desperate need of reform."

Ms Graham notes that the announcement came just four months before a significant rise in IPT comes into force: "In a challenging market for insurers, the cumulative effect of these changes will inevitability feed through into price rises for policyholders. The impact won't be felt overnight but slow-burn issues can be more damaging in the long run as they are less visible."

She adds: "In a low growth environment, it can be a challenge for our members to justify insurance premiums to their business and even a small impact on price could have a disproportionately negative impact on insurance purchase."

This view is supported by a survey of insurance brokers conducted by the British Insurance Brokers' Association, which reveals a concern that many individuals, households and businesses are likely to dramatically scale back their insurance protection if the IPT rises any further.

The survey reveals that more than three quarters of brokers have been forced to address the issue of increasing insurance costs with many of their customers, and more than 90% felt that a further increase in IPT would have a detrimental impact on customers, with almost 20% believing customers would choose to go uninsured.

Mike Dickinson, sales and marketing director at Midlands-based insurance broker Russell Scanlan, concludes: "Our advice to businesses is simple: plan ahead now for the rise in premiums that will come as a result of this rate change.

"It is unclear how much premiums will rise, but it is certain that they will and they could be significant. In particular, this change will impact motor (rumours of a 20% hike in premiums are already circulating), employer liability and other forms of liability claims."

Only time will tell the true impact of this decision and, importantly, the impact on the reputation of insurers.