South Korea's insurance market has come a long way since the nation's first product -- insurance for cows -- was sold in 1897. Today, thanks to more than four decades of economic growth and the country's high level of personal savings and life insurance, it boasts one of the largest insurance markets in the world.

Its strength can be seen in the latest figures from its regulator, the Financial Supervisory Service. These show that in 2017, insurance companies' preliminary net income rose by 33% to KRW7.83trn ($6.90bn), with this buoyed by the stock market rally, higher interest rates and, for motor insurers, improvements in loss ratios. Challenging times But while these are impressive results, South Korea's insurance market faced some challenges last year. Although net income increased, premium income remains relatively flat, with life insurers seeing the figures go into reverse for everything bar protection (see table). On top of this, early indicators for sales in 2018 suggest a similar landscape this year. According to its Insurance Industry Outlook and Issues 2018, the Korea Insurance Research Institute expects life insurance premium income to grow just 0.3% this year, with non-life insurance increasing by 2.5% in 2018. The stalling of sales growth is down to one of the same factors that has helped insurers boost their income -- higher interest rates. As these higher rates have pushed up the burden of household debt, the industry expects to see lapse ratios spike and new sales evaporate.

This presents a significant challenge to the South Korean insurance industry. Self-provision is the norm in South Korea, with the state providing very little in the way of social security. Therefore, if policies lapse, individuals could be left without any financial safety net. Subsequently, there have been calls for the industry to look at ways to avoid this.

Another significant challenge for the general insurance market in South Korea is the climate. Although it is partly sheltered from the typhoons that hit southeast Asia, at least one will pass close to or over the country each year, usually between July and September. Invariably, this results in heavy rain and flooding.

From a property insurance perspective, these floods are significant. Estimates suggest that as much as 80% of total property damage -- equivalent to about KRW50bn ($44.34m) a year -- results from these floods.

Strict building codes are in place to ensure that properties can withstand wind damage from typhoons but, the rapid economic growth the country has experienced during the last 50 years means that new property is always under construction. Inevitably, some of this is built in areas with a high risk of flooding.

Work is underway to address this. The government has invested heavily in flood defences since the 1980s, identifying sites with a high flood risk and implementing a variety of defences to prevent future losses. These include retrofitting properties, increasing sewer capacity and installing underground tanks to store the flood water.

South Korea's general insurance market is also exploring new opportunities, with an increasing focus on incentivising risk management. On the health side, this has seen the introduction of rewards for healthy behaviours. These policies, which offer incentives such as lower premiums or points that can be used to buy healthcare products or services, went on sale in April 2018, with about 60,000 policies sold in the first two months.

This type of initiative is welcomed by Asian reinsurance company Korean Re. As well as encouraging healthy behaviours, it offers the potential for improvements in loss ratios while also helping to reduce the nation's rising healthcare costs.

The motor insurance market is seeing growing numbers of motorists buying cover online, rather than through more traditional routes. However, with the internet still only accounting for just under 50% of sales, it is a distribution channel with further growth potential.

There has also been a huge rise in mileage-based insurance. This was launched at the end of 2012 to reward low-mileage drivers with discounts on premiums. Already, more than a third of motorists have taken out this type of cover, with the over-70s the most likely candidates.

New markets are also being created, with changes in the public's attitude to animals, meaning that the country's first pet insurance is currently under development. The number of pets has almost doubled in the last few years, from 4.7 million in 2010 to more than 8.7 million today, driving the Korea Insurance Development Institute to explore this market.

Future trends in South Korea's insurance market are also likely to be influenced by political changes. After the country's former President Park Geun-Hye was impeached in 2016, the political landscape moved to the left when Moon Jae-in was elected in a landslide.

Part of his appeal was in his promises to solve the North Korean crisis. These were turned into action within his first year as President, via the historic meeting in April with North Korea's leader Kim Jong-un, which saw the two leaders agree to end the hostilities that have lasted for nearly 70 years.

Although there's still uncertainty about how these talks will progress, South Korea's economy, and its insurance market, are certainly expected to benefit as a result of the thaw in relations. 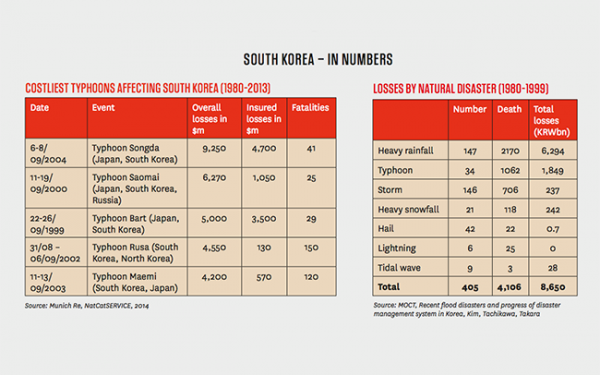