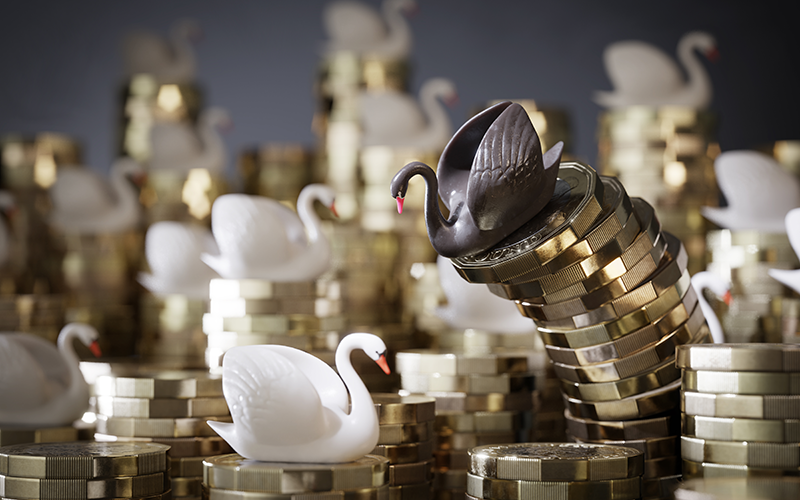 The term ‘black swan’ – meaning an unpredictable event that has potentially severe consequences – really stirred imaginations after 9/11 and then the global financial crisis of 2008. However, once strongly entrenched, it became an unmovable goalpost and a stereotype frame of reference for every risk manager. Despite its merit, it ended up as a cliché for many lazy users.

Mind you, we all have our own fascinating and unique layers of stories, fables and myths. These are further juxtaposed against thoughts of fantasy and reality – a spectrum ranging from muddied to crystal clear. Then there are times when the fantasy gets jolted by a reality check. If not, it could remain cobwebbed or make you interpret the reality in shades and colours that are unreal.

In my menagerie sit many such notions, from Aesop’s Fables to ‘Panchatantra’ and a host of nursery rhymes influences, including the ‘black sheep’. ‘Cry wolf’, for example, is one that oscillates from reality to fake to reality, and reminds you of the changing dynamics. Disney is full of them. But despite the diversity of such signposts, we tend to be dominantly conditioned by the once-upon-a-time game-changing jolter. Such a risk can only be mitigated by seeking a fresh signal, notwithstanding the attendant noise. Michele Wucker’s ‘grey rhino’, for instance, is one such recent and profound wakeup call – whether you are looking at financial, climate or pandemic risks.

This is how Ms Wucker demolishes the entrenched misplaced narrative: “Given what we know about pandemics and their increasing likelihood, outbreaks are highly probable and high impact. I coined the term ‘grey rhino’ for exactly such events: obvious, visible, coming right at you, with large potential impact and highly probable consequences.”

Interestingly, in a recent interview with Bloomberg Markets, essayist and former risk analyst, Nassim Nicholas Taleb, himself said the coronavirus pandemic was preventable. It is not a black swan but a white swan.

Metaphors first. Black swans fly long distance – should they thereby allow you an opportunity to anticipate them, provided you have the right tools? A grey rhino will charge at you, like a sprinter – it will be a short burst. You need to decide quickly whether flight or fight is the right response.

Ms Wucker highlights how societal mindset and diversity determine your response mechanism. The challenge in the US is around the white-male mindset and American individualism. Some call it ‘coronavirus maximalist’ versus ‘coronavirus minimalist.’ On the other hand, Chinese society is dependent on the state. The top leadership gets involved in pre-empting the grey rhino. The risk management process, therefore, flows top-down.

At this point, it is also useful to check out the looking-glass of the risk function – a profession charged with anticipating and mitigating risk. It needs to keep an eye on both the rearview and the front. History shows serious lapses on its part. So, what holds it back? Is there something inherent that creates blindspots? Individualism might give rise to dissent. But that is good for generating diverse viewpoints. How far does it come in the way of execution? Could there be any other reasons?

Many months ago, I was in a conversation with the chairperson of a global risk committee. In response to how the function should be revisited, I said it is too risky to leave the risk function to ‘bean-counters’ alone. As a part of the mix, you also need people with a liberal arts background – that fosters diversity of the right-brain and the left-brain. Mr Taleb has said it is very easy to say retrospectively that one could see something coming. But prospectively, it is very difficult. I would add, particularly when imagination is in short supply. Liberal arts minds bring the much-needed imagination.

Global businesses homogenising risk functions run the risk of replicating the home country’s ‘tried-and-tested best practices’ far and wide. In the process, they create a systemic risk of their own making. That is ‘anti-diversity’. You not only impose a protocol lacking diversity, but you also snuff out the opportunity to incorporate the knowledge of each location. This need not always be a west-to-east issue, either. In Toyota’s case, it was the other way around.

Generally speaking – at this juncture – neither the global leaders nor the risk managers are effectively connecting the dotted lines between climate change and the pandemic. What holds them back from making the obvious link? A recent paper suggests that the Pentagon might have been aware of the potential outbreak of the coronavirus. Similarly, ahead of 9/11, the CIA had enough signals but as always was besieged with excess noise.

Why do some banks, asset managers and insurers continue to invest in fossil fuels or greenwashing? Why aren’t their risk managers standing up? Should we allow this grey rhino of climate change to rampage and then wait for the next one to repeat? Here is an opportunity to catch the rhino by the horn.

Before I sign off, let me borrow from John Elkington, the father of the triple-bottom line, and warn you – don’t you ignore what appears to be an ‘ugly duckling’. It may, after all, turn out to be a ‘green swan’. A welcome change as long as it delivers exponential progress in the form of economic, social and environmental wealth creation.