Oh cover, where art thou? 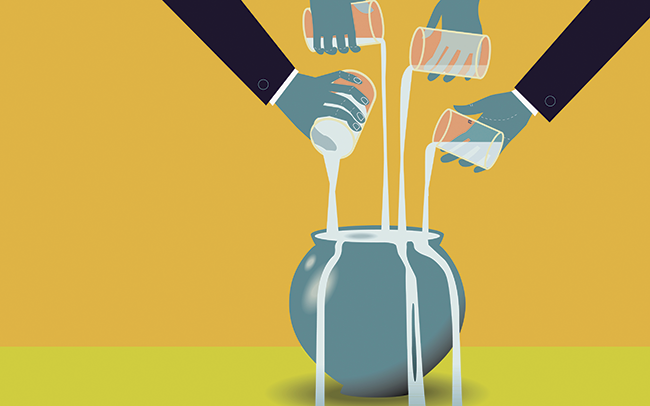 Mergers and acquisitions (M&A) activity has enjoyed a boomtime around the world in recent years, with global deal values set to exceed $3trn during 2018 -- the fifth successive year that milestone has been passed.

M&A deals are being driven by a number of factors, including pressure from investors and a search for innovation, while the amount of dry powder that global private equity (PE) funds have is another key metric.

Investors have flocked to PE funds as a result of the low yield on fixed income and other investment classes, as well as being attracted by the solid returns PE funds have generated during the past decade.

As the size and volume of deals rises, so the risks associated with them increases, while the sellers' market means there is a certain pressure to execute transactions quickly, which can only add to those risks.

Consequently, those involved in M&A transactions are constantly looking for ways to smooth the deal process and alleviate the risks faced. So, the demand for insurance coverage through warranty and indemnity (W&I) cover has grown in tandem with the increase in deal volumes.

"Today, global M&A activity is on the increase and the demand for insurance coverage is also on the rise," says Brian Benjamin, global head of M&A
at XL Catlin.

"The value of M&A deals is expected to exceed $3trn in 2018. We also expect the expansion of the M&A transactional risk insurance market to continue. In this very competitive environment, deal professionals and their brokers across the world are looking for innovative solutions to support their acquisitions or sales."

M&A insurance was originally invented for PE clients and at the moment it only services private M&A transactions. It does not apply to on-market acquisitions or public M&A generally.

W&I insurance covers buyers -- and sometimes sellers -- for loss suffered by the buyer as a result of breach of the seller's warranties.

"The reason M&A insurance is such a compelling solution for M&A participants is because it does two things: transfers liability risks to the insurer, and gives a strategic benefit to M&A buyers and sellers, facilitating deals with less risk for the buyer and seller," says Angus Marshall, head of M&A, UK and London market, AIG.

"M&A insurance covers risk and it provides a strategic benefit to the parties undertaking M&A," he continues. "Buyers demand a full set of warranties, usually indirectly or tacitly related to what they're willing to pay. So, if there's no warranty protection, there will be an implicit discount on the purchase price of the company.

The European M&A insurance market consists of managing general agents (MGA) and company insurers. The available capacity in the London market can easily aggregate to $500m for a single policy, according to
Mr Marshall, while the largest global M&A programme recently had aggregated capacity of $1.5bn.

The appetite of MGAs has traditionally been focused on small to mid-market PE transactions, with deal sizes anywhere between $100m and $500m. The largest transaction AIG has seen had an enterprise value in excess of €12bn. However, as the volume and size of deals and the associated coverage has grown, so have claims -- both large and small -- and they are likely to be a constant feature in M&A deals going forward.

A recent AIG report finds that almost one in five AIG W&I policies received a claim notification. The biggest deals have the both highest average claims frequency and the largest average claims.

"There's going to be an evolving claims landscape. In our experience, when the M&A market contracts due to an economic downturn, claims generally increase," says Mr Marshall.

"During the current M&A boom, we have seen more and more capacity enter the M&A insurance market. The commitment of that capacity to the market remains to be seen -- an economic downturn may precipitate a significant withdrawal of capacity, which will have various effects, including increase in premium.

"The market has grown up and what we see is more expansive coverage from underwriters. We're seeing lower retentions, reduced premiums and an increase in the volume of transactions."

Mr Marshall concludes: "Concurrent with these market changes, there has been a significant expansion of coverage and, as a result, these factors are likely to result in increased claims activity. M&A insurance claims can be characterised as high severity but low frequency."