The rise of the flood 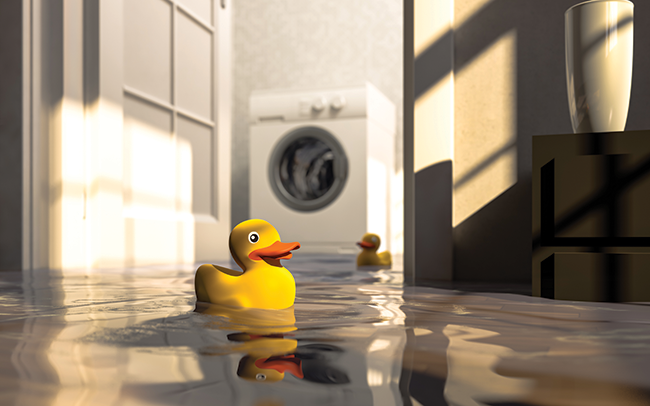 It seems counterintuitive to consider flood issues as the UK enjoys one of its driest and hottest summers, however the risk of flooding come the winter has not diminished

Insurance payouts to homeowners and businesses for storm and flood jumped to £167m in the first quarter of 2018, according to the Association of British Insurers, and there are warnings that this is a sign of things to come.

Flood modeller JBA Risk Management fears annual average losses for residential properties in the UK could rise by 25%-30% in the next 20 years as a result of climate change.

This projection comes from JBA's new UK Climate Change Flood Model, which the company claims will help (re)insurers understand the impact of climate change across the country. It provides quantitative results that support projections from research and government data that the number of UK flood events causing financial loss will rise between now and 2040.

For this model, JBA used government climate change factors and applied statistical adjustments to its large set of possible UK river, surface water and coastal flood events. The data generated provides an insight into potential changes to flood risk by 2040.

The estimated rise in annual average loss of 25%-30% is based on a residential property portfolio without adjustment for limits, deductibles or policies with flood exclusions.

Gary McInally, chief actuary at Flood Re, says: "The impact of climate change on flood severity and frequency presents increased uncertainty for insurers and reinsurers."

Through the model, insurers have the ability to analyse flood at individual property level across the whole of the UK. This enables the (re)insurance industry to more effectively manage flood risk.

In the UK, one in five properties are at risk to flood and annual economic losses are estimated to be in the region of £500m.

However, insurers worldwide have been fighting a battle to persuade property owners to adopt flood resilience and they say preventative measures are being held back by a lack of investment. According to the ClimateWise Investing for Resilience report, of $175bn in 2016 economic losses related to natural hazards (of which floods are a major part), only $50bn was insured.

Zurich says this $125bn protection gap is due in part to the lack of evidence of "what works" and because there are few incentives and regulations to encourage investments into sound protection measures at all levels of society.

The insurer has announced that the flood resilience alliance, which it leads, is being extended for another five years. Because current resources are limited, alliance partners will focus on increasing investments into strengthening resilience to flooding.

In the past five years, a multi-sector alliance of NGOs, academia and Zurich's risk management experts has focused on shifting from the traditional emphasis on post-event recovery to stressing pre-event resilience.

More than 110 communities in nine countries have benefited from alliance projects. The alliance's objectives for the next five-year period will be:

"Floods affect more people globally than any other type of natural hazard and cause some of the largest economic, social and humanitarian losses," says Linda Freiner, group head of sustainability.

Returning to the UK, Flood Re was formed two years ago to enable UK insurers to continue to offer cover to insureds already hit by flood events.

The good news is that the scheme appears to be working. This summer, Flood Re is reviewing premiums and considering "a range of different reductions in the level of premiums for buildings and contents policies to optimise the benefits of the scheme".

Once the changes are confirmed, insurers will implement the necessary changes to come into operation from 1 January 2019.

Meanwhile, Flood Re has published its second transition plan -- Flood Re, Our Vision: Preparing for a future of affordable flood insurance -- which outlines its latest thinking on moving to affordable risk-reflective pricing by 2039.

The vision sets out 12 areas where Flood Re believes things need to change. These include limiting the risks of flooding; reducing the costs of flooding; promoting a competitive insurance market; and understanding the limits of affordability.

Numbers from Flood Re: