Kenneth Cotterill chalks up 82 years as a CII member 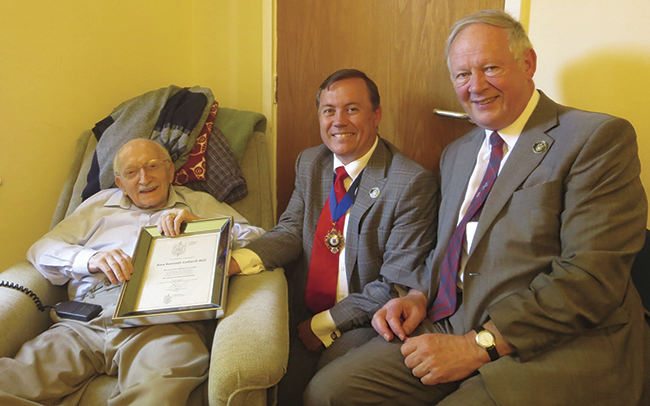 Kenneth Cotterill from Loughborough, a member of the Insurance Institute of Leicester, recently CII.

Christopher Macleod, president of the Insurance Institute of Leicester, arranged for a special certificate to mark the occasion, which he and fellow local council members Mal Fairhurst and Keith Torrance visited Mr Cotterill to present. It is now hanging proudly on his wall.

Separately, 2017/2018 CII president Dame Inga Beale sent a letter of congratulation, which he was delighted to receive.

Mr Cotterill joined the Liverpool & London & Globe Insurance Company (now part of RSA Group) in September 1936 at Albert Square, Manchester. After war service, he completed his Associateship and became head of the fire department at Burnley, then local manager of the office at Loughborough, where he stayed until his retirement in 1980. He was president of Loughborough Rotary and has continued to live independently until just a few months ago, when a fall persuaded him to move into a care home. Until a year ago, he was still despatching copies of his church magazine to subscribers by post.