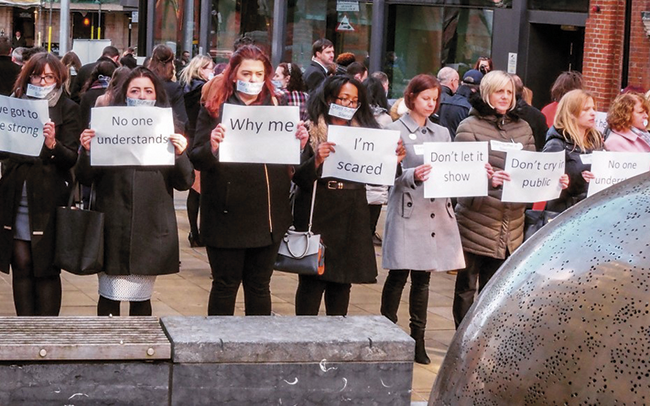 The institute prides itself on its annual charity support activity and the flash mob -- organised by the BII's head of charities, Rachel Sudlow -- was mobilised on 8 March, the day of the institute's annual dinner, with upwards of 100 colleagues from the Birmingham insurance and financial services community joining Birmingham Mind to provide a fun focal point with an important message.

At 12.30, the mob formed to coordinate the handing out of information, the raising of banners and placards, and to reveal they were wearing Mind t-shirts. The mob then maintained a symbolic and powerful silence, with stickers across their mouths to emphasise the 'Don't Suffer in Silence' message. A blast on a horn then saw the mob move to interact with observers to talk and raise awareness of mental health challenges -- the silent issue professionals do not talk about.

The flash mob took place around the pedestrianised area of Church Street outside the offices of JLT, which is the workplace of BII president Nikki Southwick-Gough.

For more information on the Birmingham institute, visit: www.cii.co.uk/birmingham