Lockdowns provided the perfect excuse for many Brits to buy a pet. But, as Liz Booth reports, the cost of ownership was underestimated by many

During the Covid-19 lockdowns, another surge event quickly emerged – that of buying a new cat or dog. Some 3.2 million households acquired a pet during the period, bringing the total number of pet-owning homes in Great Britain to more than 17 million.

It seems the image of Brits as pet lovers has been confirmed and, with people working at home, it became much easier to take on a furry friend. But now, as we get back to our offices, some of the realities of pet ownership have been kicking in.

For example, in a study commissioned by Forbes Advisor, more than half (53%) of owners admitted they had underestimated the cost of having a pet.

One of the consequences reported by The Dogs Trust has been a 100% increase in traffic to the ‘giving up your dog’ page on its website since lockdown restrictions were eased.

Another standout insight from the research is that, despite medical bills being the priciest pet cost, more than two fifths (44%) of Brits admitted to not having pet insurance, with half of owners (50%) spending £500 to £1,000 a year on medical bills.

Additionally, half (52%) of UK pet owners would resort to credit cards or raiding their savings to fund veterinary care, and a fifth (20%) would use their overdraft.

The average price of specialist treatment such as orthopaedic surgery was calculated to be £1,037.80, using price data from the Animal Trust. This expense was not taken into account when calculating the average annual cost of ownership, because it is not considered a common expense.

Kevin Pratt, insurance expert at Forbes Advisor, says: “It seems clear that many people bought a ‘pandemic pet’ without fully thinking through the implications. One thing any pet owner will tell you is that a trip to the vet – probably inevitable at some point – can be extremely expensive. This makes pet insurance such an important purchase.

“Having cover in place means animal lovers don’t have to worry about paying for the care their pet might need, and they won’t need to raid their savings or even go overdrawn to pay the vet’s bill. We’re clearly a nation of animal lovers, even if we sometimes let our hearts rule our heads when it comes to bringing a pet into the family home. That’s why spending a bit of time to find the right pet insurance is such a good idea.” 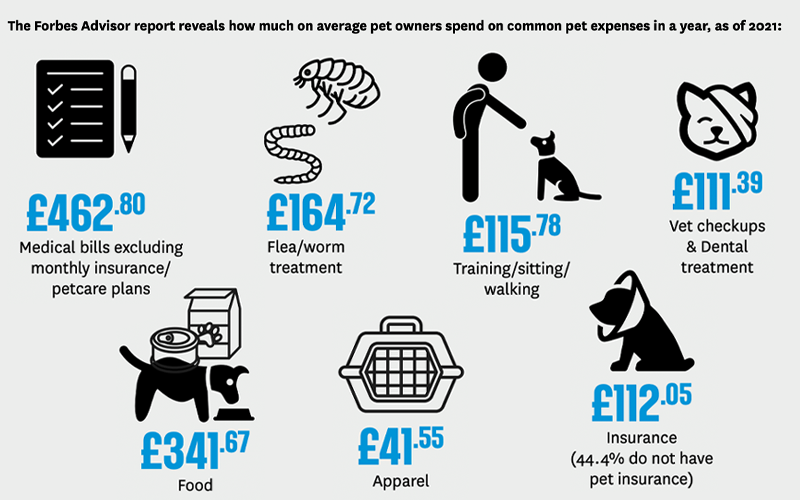 The good news is that pet insurers are reporting such a surge of demand that they are having to increase their staff to cope with the flood of inquiries.

At the launch, Co-op Insurance revealed YouGov research that showed more than half (51%) of the British public would like to get a pet, and of those, 91% would consider a rescue animal. However, almost four in ten (39%) would be put off unless the animal was known to have a clean bill of health and 29% were deterred by a belief that a rescue animal would be expensive to insure and care for.

Co-op Insurance is hoping to make pet adoption more affordable for its customers, with an introductory discount on policies for those insuring a pet from a recognised animal charity or rescue centre – 7.5% for Co-op members and 2.5% for non-Co-op members. The cover is available for dogs and cats over eight weeks old

There is also an increasing use of technology to help drive pet insurance uptake. Although currently available in the US only, Petriage, a pet health technology company, has developed a veterinary platform it calls a “teletriage symptom analysis tool”, which informs pet owners about the urgency of seeking care for their ailing dog or cat, based on information they input.

Petriage is teaming up with pet insurer Crum & Forster Pet Insurance Group in the hope of increasing the number of pet owners who have access to Petriage’s online pet symptom checker and Petriage Live, its 24/7 nurse helpline. The services are expected to become available to customers enrolled in the C&F Pet’s ASPCA Pet Health Insurance and Hartville Pet Insurance programmes early this year. This article appeared in our February/March 2022 issue of The Journal.
Click here to view this issue
Filed in:
Features