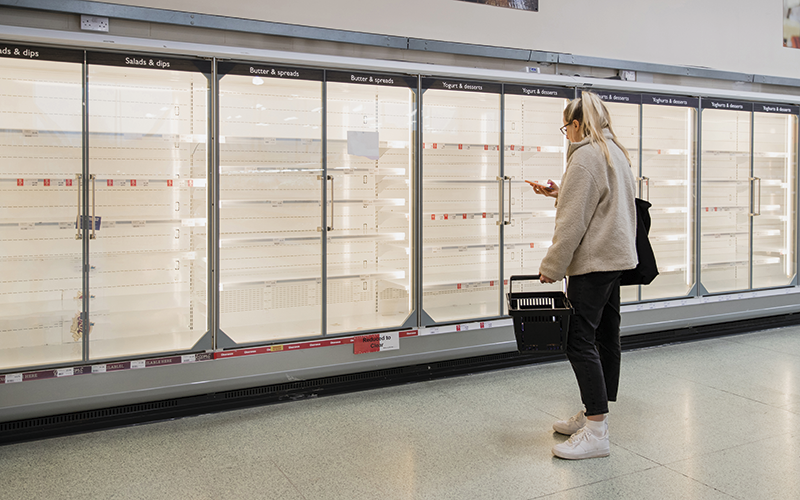 Hill Dickinson’s cargo and logistics experts Richard Allingham and Elizabeth Elliott are among the many warning that supply chain problems could mean everything from the must-have toy to the Christmas turkey, and even the gas required to cook it, may not be available by winter 2021.

The lawyers warn: “While there is every hope that the pandemic is in retreat, this doom-laden scenario could become reality if the global supply chain buckles as a result of the unrelenting pressure it is currently operating under. The general perception that the international supply chain runs smoothly and without incident has been unceremoniously shattered by a series of events that have shone a collective spotlight on this global behemoth: the Covid-19 pandemic, the blocking of the Suez Canal and the unleashing of pent-up retail activity.”

Behind the crisis, they point to recent chaos in Chinese ports. At the port of Ningbo Zhoushan, one of the top-five busiest ports in the world, a decision was taken to close the port to trade when a port worker tested positive for Covid-19. Most recently, a lack of coal (and power) in China has again put global supply chains under threat.

As the lawyers explain, such closures invariably reverberate across the shipping industry: ships are unable to dock and discharge their cargo; vessels anchor offshore in limbo awaiting decisions from carriers; cargo is at risk of non- or late delivery; and shipping companies scramble to make last-minute alternative arrangements, seeking new ports and discharge destinations.

Annual world shipping trade is currently valued at $14trn (£10.2trn). Shipping plays a crucial role in the transportation of commodities, moving nearly two billion tons of crude oil, more than a billion tons of iron ore and 350 million tons of grain every year. In the last few decades, the dollar value of trade entering these ports has risen exponentially and become concentrated into more than 50 ports, ranging from Rotterdam to Shanghai. Analysis by Russell Group on their ALPS Marine platform shows that more than 55%, or $7.5trn (£5.5trn), of global trade is concentrated within these 50 ports.

China’s partial closure of the port of Ningbo threatened $172bn-worth (£125bn) of global trade and the export of $39.2bn-worth (£28.5bn) of integrated circuit boards, according to Russell Group.

The closure came at a time of great strain on global supply chains. Disruptions at Yantian and Suez have delayed schedules and meant that organisations are scrambling to secure key commodities for their products.

The Evergreen container ship that blocked the Suez Canal was carrying goods worth $89m (£65m) but with the potential to create more than $40bn (£29bn) of trade disruption, Russell analysis reveals.

Meanwhile, it also warns of a Brexit logjam. The UK ports of Felixstowe and Southampton experienced severe disruption as they struggled to keep up with the Covid-19-induced backlog of trade entering and leaving the ports. The port of Southampton is the UK’s largest and main port, with more than $35bn of annual trade flowing in and out of the port.

Likewise, this concentration of accumulated risk is extended to Felixstowe, which, with an annual flow of £6.5bn, is the UK’s second-largest port. Many leading UK companies such as Asda (£315m) and Rolls-Royce (£156m) had a large exposure to the port.

So, what about insurance? Fundamentally, many of these risks are uninsurable. As Claire McDonald, UK and Ireland managing director for HDI Global, explains: “Property, engineering and marine policies require a physical event to trigger a payout. For example, a simple delay in materials to a construction project would not be insured. However, should there have been a fire at the construction site and then consequently there are delays in receiving the materials needed for repairs, then this could potentially make any valid DSU claim that bit larger.”

She said insureds have two options when facing these kind of supply chain issues: they can either find more suppliers and reduce the risk of delays through diversification; or they can bring production closer to home and limit exposures in that way.

However, as one Swiss risk manager said recently, it is not necessarily that straightforward. Working in the food sector, they have had to diversify and use many more suppliers than usual.

While there is every hope that the pandemic is in retreat, this doom-laden scenario could become reality if the global supply chain buckles as a result of the unrelenting pressure it is currently operating under

The upshot has been that the new (and smaller) suppliers are not insured to the levels of their previous suppliers. That, in turn, has meant the Swiss company taking on more risk for itself and choosing whether or not to insure.

Either way, there are some interesting conversations going on between insureds, brokers and insurers right now and, of course, many customers will be hoping for a cooked turkey on their Christmas dining tables.

This article appeared in our October/November 2021 issue of The Journal.
Click here to view this issue
Filed in:
Features
Topics:
Broking
Business Interruption
Claims