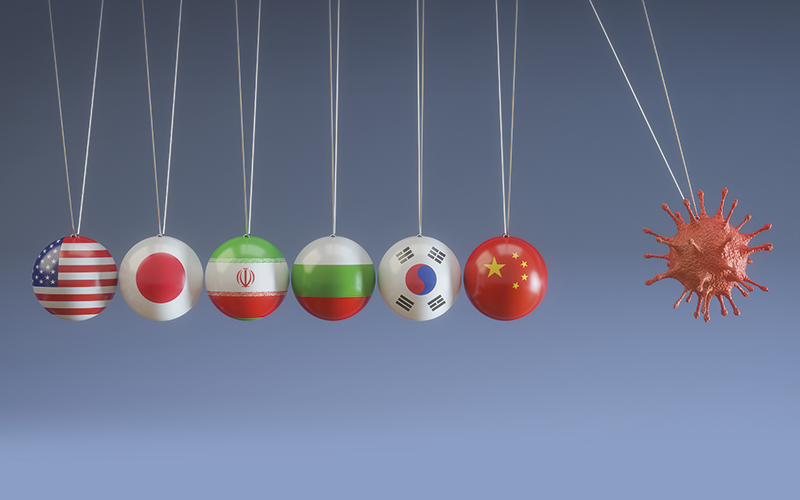 The 20th anniversary of the 9/11 terrorist attacks served as a stark reminder of how quickly the geopolitical landscape can change. The 2001 attacks in the US proved to be a watershed moment, as the brief lull that followed the end of the Cold War morphed into the War on Terror.

Following those events, the current century has seen a paradigm shift in the geopolitical risk landscape, with the 2008 financial crisis and Covid-19 pandemic accelerating the rate of change.

A recent Lloyd’s report, Shifting powers: meeting the challenges of the geopolitical landscape, which was produced in partnership with the University of Cambridge’s Centre for Risk Studies, examines these risks. It also provides businesses with advice on how to mitigate geopolitical risks, and highlights how insurance products such as political risk cover can help.

Lloyd’s says: “We now face a future in which multipolarity – the equal distribution of power between two or more states – changes the behaviour of risks to the increasingly connected global system.

“Today, the price of oil, elections in South America or the failure of an emerging economy create far-reaching effects through the globalised system. In the future, the exposure to these effects will likely only grow as the structure of our globalised economy shows very few signs of ending soon.

“Most of the last decade’s geopolitical upheavals can be directly attributed to the fallout from the global financial crisis and the austerity measures that followed. The economic havoc generated by Covid-19 has reopened many of those wounds and will carry with it new rivalries as well as the hangover of national debt.”

The report notes that in the short term, geopolitics is set to become more idiosyncratic and unpredictable, with raised tensions destabilising societies and flowing through to international business and markets.

Looking further ahead, the coming decade will most likely see an increase in great power competition and further escalation of many of the proxy confrontations that have driven conflicts in the past few years.

However, in the long term, the world will have to continue coping with existential risks that would dwarf Covid-19 in terms of potential impacts, including nuclear proliferation, humanitarian catastrophes and extreme weather events driven by climate change.

Lloyd’s says: “Overall, the post-pandemic decade is likely to see profound changes in geopolitical configurations, domestic balances of power and even fundamental worldviews.

“This paradigm shift presents a host of new challenges to our customers, which the insurance industry can support, in part. As the business world recovers from the impacts of Covid-19, risk professionals will seek new and more expansive solutions to protect business interests from increasing trade tensions, currency volatility, increased social unrest and other geopolitical perils.”

Lloyd’s warns of a “protection gap”, which leaves vital supply chains, smaller businesses and emerging economies highly exposed to disruption from geopolitical risks. The report examines 10 major themes, which are often interlinked. These range from the impact of the pandemic on geopolitical relationships, to greater power rivalries, localism versus globalism, and migration and demographic shifts.

It looks at how the major consequences of geopolitical risk impact multinational companies. These risks can cause the disruption of supply, sales opportunity loss, price and currency fluctuations, and legal and reputational risk.

Another major issue highlighted by the report is cyber risk and the “new tech arms race”. Lloyd’s says that cyber operations have become fully integrated into national security and regional conflict in the past decade.

It adds: “Cyber has grown to be one of the most expensive threats to businesses – with more than $5trn in losses annually, cybercrime represents the largest transfer of economic wealth in history. Fear of escalating cyber conflict has become a constant for businesses and governments alike.”

These risks present both challenges and opportunities for the insurance industry. Geopolitical threats have the potential for ‘clash’ – meaning the ability to cause loss to multiple lines of business in a single event.

However, they have also produced some of the most novel insurance innovations of the last three decades, such as national pools, private mutuals, swaps, government backstops and risk sharing across multiple stakeholders.

Lloyd’s concludes: “There is a major growth opportunity for insurers to provide risk transfer products and services to address geopolitical risks.

It may involve defining products and services that protect corporate earnings across a wider range of potential harms and externalities, rather  than indemnifying a narrow range of perils and loss causes that are tied to historical origins of property protection.

“However, we will still need a list of identified and covered perils that are sudden and accidental – since these are the essence of insurable risks. It may mean creating closer risk partnerships with policyholders, acting as risk advisers, preparedness planners and crisis managers, in addition to providing financial compensation after a loss event.”

This article appeared in our October/November 2021 issue of The Journal.
Click here to view this issue
Filed in:
Features
Topics:
RISK