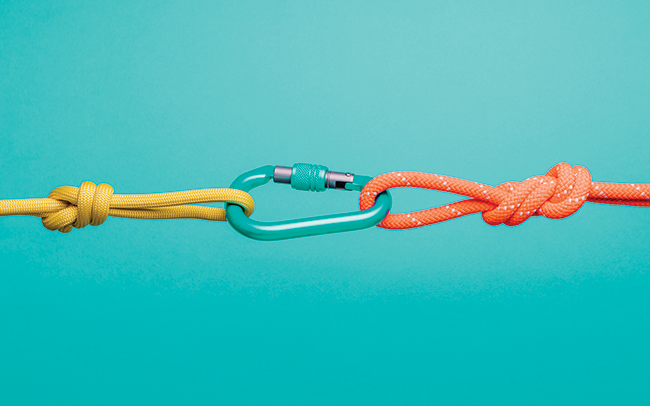 As the Covid-19 crisis continues, Sam Barrett asks: how will the insurance profession strengthen its response to future pandemics?

When the first accounts of a new virus started coming out of Wuhan in December 2019, few expected it would lead to almost total global lockdown a few months later. And although the threat of a pandemic has always been on the risk radar, the experience is proving to be a significant test for the insurance profession.

As well as having to adapt their own operations to allow for social distancing, and then the even stricter requirements of lockdown when they were introduced on 23 March in the UK, insurers have also had to implement adjustments to support their customers. Mohammad Khan, head of general insurance at PwC, has plenty of praise for the actions of the insurance profession. "It has done an amazing job," he says. "In just 10 days, every insurance company had measures in place to keep staff safe without customer detriment. This has seen personal lines insurers flexing policy terms and conditions, especially where it helps keep a key worker on the road."

As an example, he points to an instance where a key worker had a car accident and their insurer tweaked the policy terms and waived an excess to ensure they had a hire car to get to work.

A more formal, profession-wide approach was also taken, with the Financial Conduct Authority (FCA) confirming the measures that insurers should take to help customers who were suffering financial difficulties as a result of Covid-19. These include: reassessing a customer's risk profile; adjusting cover, for instance moving from fully comprehensive to third-party fire and theft; and waiving cancellation and other fees associated with adjusting a policy. Payment deferrals, allowing a customer to defer by one month to three or longer, are another option.

Change has also been thrust on insurers, most notably in the private medical insurance sector. With the private sector providing its capacity to the NHS to help it treat Covid-19 patients, treatment for medical insurance customers was put on hold. In response to this, medical insurers enhanced their cover with additional services such as virtual consultations and higher levels of NHS cash benefits, while launching promises to adjust terms in respect of any treatment delays they experienced.

Sadly, the picture is more mixed on the commercial lines side, most notably around business interruption insurance (BI). Although the government stated that coronavirus, as a new 'notifiable disease', would be recognised by insurers as a trigger for a claim, policy wordings meant it was not quite so straightforward. "Some insurers declined claims, while others took the view they would pay anyway, whether for goodwill or because it was cheaper than fighting it," says Roger Flaxman, principal consultant and chairman of Flaxman's Insurance Claims Advocacy. "Unfortunately, I have also seen claims that were agreed as covered and then loss adjusted down to a sum so low that it became almost pointless to claim."

Faced with policyholder backlash and group legal actions against several insurers, the FCA announced that it would obtain a court declaration to resolve the contractual uncertainty of a selection of the policies in dispute. "An unfavourable court declaration will probably be followed by an appeal, which will take time, and even if successful there is still a long way to go for each policyholder to prove their actual loss," says
Mr Flaxman. "Whatever the court rules, this lengthy delay will also result in businesses going under and that could further damage the integrity of the insurance profession. The government has shown that it is comfortable supporting employees by paying 80% of their wages and so, for the sake of the economy, it makes sense to keep the employer companies afloat as well."

One idea he suggests is that the insurance profession works with government to provide those policyholders with BI cover with enough 'drip feed' financial support to keep their businesses alive, thereby reducing the consequential costs to government of bankrupt business and unemployed staff. "Insurers have the knowledge, skills and distribution network to make these payments and the government could initially provide the funds and then sort it out with insurers later," he adds. "We have already been told more than £1.5bn of government money has been lost in fraudulent claims -- the insurers have the expertise to prevent fraud."

Policy wording and the intention of that wording is key. While not every eventuality can be predicted or planned for, a review of policy wordings and the interplay between cover, extensions to cover and potentially relevant exclusions cannot hurt, and might help protect against future confusion

As well as clearing up claims confusion, there is also a pressing need to prevent future misunderstandings. Barney Burton, legal director at law firm DWF, believes a review of policy wordings is essential. "Policy wording and the intention of that wording is key. While not every eventuality can be predicted or planned for, a review of policy wordings and the interplay between cover, extensions to cover and potentially relevant exclusions cannot hurt, and might help protect against future confusion," he says. "It is important that the intention of particular clauses is made abundantly plain to both broker and insured. If possible, intention should be taken out of the equation."

There are also questions over the nature of BI policies, especially as risks evolve and more businesses find themselves out of pocket and unable to claim. Stephen Catlin, CEO of speciality insurer and reinsurer, Convex Group, explains: "BI claims are triggered by property damage but with a pandemic or a cyberattack, this is unlikely to happen. Work needs to be done around this to ensure that policies are plain, simple and legally robust."

This shortfall was addressed for terrorism in 2018, when Pool Re announced an extension to include non-damage BI losses resulting from acts of terrorism. It is also something that the Federation of European Risk Management would like to see addressed for other catastrophic risks. In May, it called on the European Commission to create an EU resilience framework to cover financial losses resulting from catastrophic risks, such as a pandemic, where physical damage did not take place.

As well as dealing with the issues that have arisen out of this pandemic, the UK's insurance profession is also looking ahead to ensure it is better prepared for future events. Through the creation of a steering group, made up initially of seven members drawn from carriers and brokers and including Mr Catlin as chairman, it will explore how the profession responds to future pandemics.

"It's a very complex issue," says Mr Catlin. "The whole world has been wrongfooted, especially by the economic side of shutdown. Through the steering group we hope to achieve a number of objectives that will ensure a stronger response in the future." These initial objectives include determining a definition of pandemic that is legally robust, but also a strong definition of the event to ensure clarity around claims. Mr Catlin also wants to demonstrate to the government that the insurance profession is prepared to work with it on a solution and to highlight the sector's capabilities in distribution. "One of the biggest fears is that government money doesn't go to the right people," he explains, pointing to the survival of the SME sector as key to kickstarting the economy. "Every SME is insured in some shape or form, so we're in a
great position to distribute support to them."

Modelling is another area where the insurance profession could offer support according to PwC's Mr Khan. "The epidemiology experts are doing a great job but the insurance sector is very good at tweaking a model quickly in response to changes in circumstances," he explains. "Insurers bring together a unique set of skills -- underwriting, actuaries, accounting -- that could be of huge benefit in future pandemics."

Finding a mechanism to compensate those affected by future pandemics is the other key part of the steering group's work. There are plenty of protection gap entities around the world but Julian Enoizi, CEO of Pool Re and a member of the steering group, says it is important to design something specific to the pandemic risk. "Pool Re has been very successful, responding to 17 terrorist events since it was set up, at zero cost to the taxpayer," he says. "However, it's not the only model and through the steering group, we have the opportunity to look at how others work and what would be appropriate in this situation."

Among the considerations are the nature of private and public sector involvement; whether it is compulsory or voluntary; and whether it is a pre- or post-funded model.

Questions have also been raised about the remit of a potential 'Pandemic Re', with some asking whether it should be wider. Mr Enoizi says that while the steering group will focus on pandemic risk, broader needs will doubtless be considered either by the group or elsewhere. "With many systemic catastrophes, including in the case of the current pandemic, the response is only ever considered post-event. Systemic events such as a cyberattack or climate risk are already sitting on the national risk register. It might be sensible to have something in place now, rather than wait for the events to happen."

And, while an insurance solution for pandemics was not in place when Covid-19 shut down the UK, it is highly likely that the sector will be ready for future events. "There is a lot of support for this from within the industry and from government," adds Mr Catlin. "It reminds me of when 9/11 happened and it suddenly became much easier to get people round the table -- minds are very focused in a crisis." 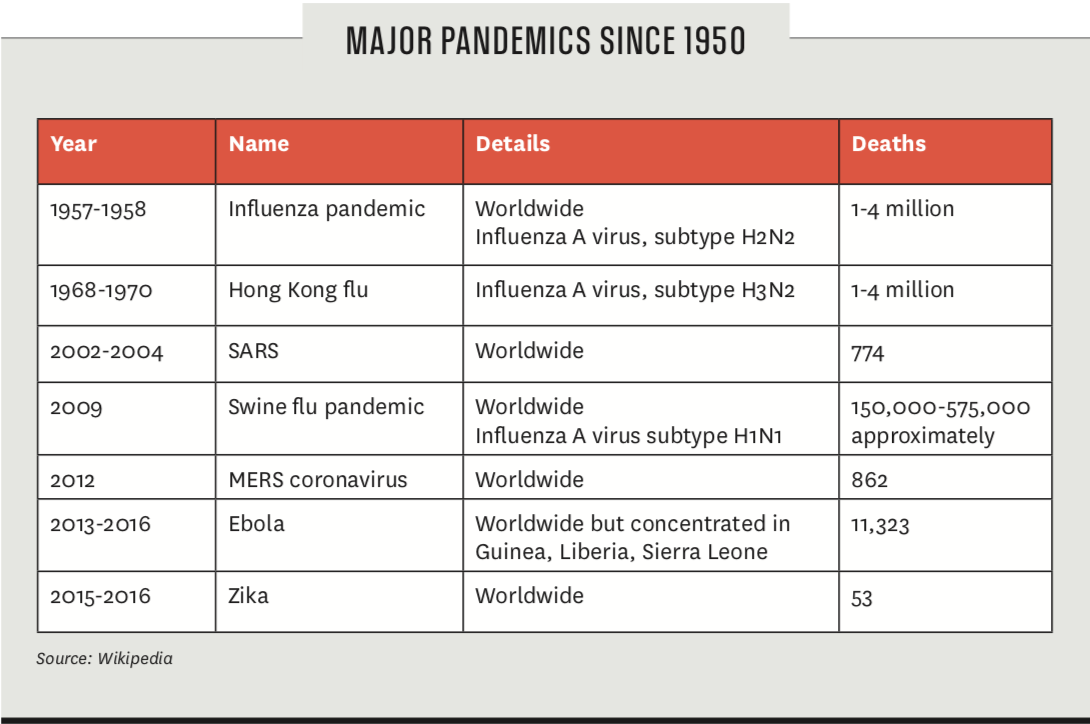