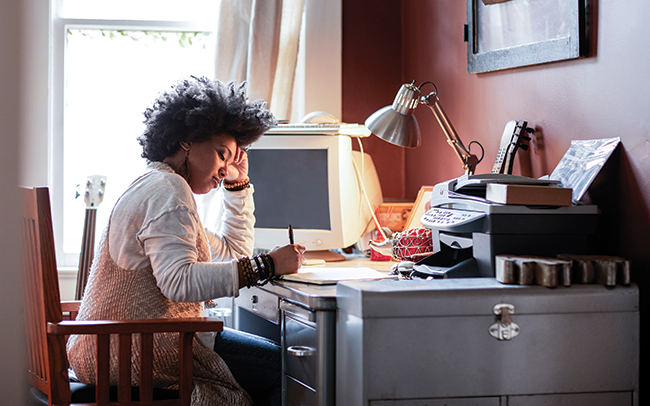 The insurance sector adapts to working from home

With thousands of insurance employees still working from home despite the easing of lockdown, Liz Booth looks at some of the strains it can put on professionals

For years, women have called for bosses at insurance firms to consider flexible hours, work from home options and parental leave if they truly wanted to improve the gender balance of the profession. As a result of the government's instruction back in March to stay at home to slow the spread of coronavirus, suddenly nearly everyone in the profession was no longer required to enter the office.

Whether the new way of working from home created by the lockdown will prove game changing in opening up new opportunities for a better gender balance from top to bottom of organisations remains to be seen.

Barbara Schonhofer, chair and founder of the Insurance Supper Club (ISC) Group, believes it will fundamentally change the way the sector works -- with a resulting improvement in gender balance.

A recent informal survey carried out by the ISC Group showed 80% wanted to carry on with home working in some way after lockdown eases, having proved it can work.

Until early March, Ms Schonhofer explains, the insurance profession was mostly fixed in its ways, arguing that people needed to physically be in the office, at their desks from 9am-5pm,if not 8am-6pm.

"There was a general resistance to home working from a hard core in the London market," she says. "There are notable exceptions but basically the tradition of the London market has involved an autocratic style of leadership, which has worked very well for some sectors, but it has lost its mojo.

"And then 12 weeks ago, we found out that suddenly, guess what, we could all work remotely and function very efficiently."

However, Diane Maxwell, former retirement commissioner in New Zealand, warns: "Sometimes the barriers are not the immediately obvious ones. They can be intangibles. The current lockdown actually has potential to exaggerate some of the existing barriers.

"Women more broadly carry the logistical load of the home. Women working from home currently might be increasing the very long list of things they are juggling."

It seems her worries are justified -- the UK's Institute of Fiscal Studies (IFS) has found that mothers in two-parent households are only doing, on average, a third of the uninterrupted paid-work hours of fathers. Before lockdown, mothers did about 60% of the uninterrupted work hours of fathers. This sharp reduction in the time that mothers are spending dedicated to paid work risks lasting harm to their careers when the lockdown is lifted, the IFS has warned.

The survey also reveals the extent to which mothers have picked up the bulk of the time spent on new responsibilities for childcare and housework: they are looking after children during an average of 10.3 hours of the day (2.3 hours more than fathers) and are doing housework during 1.7 more hours than fathers. However, fathers have also increased the time they spend on housework and childcare and are, on average, now doing childcare for nearly twice as many hours as in 2014-2015.

Claire McDonald, UK manager for insurer, HDI Global, says: "There is a belief that it is the mums in your organisation who still have the parental responsibility, even when they are working. But that is not necessarily so. Many of the younger men have wives at work and they are taking on the responsibility."

Ms Maxwell worries it can be the difference between someone applying for a promotion or not. "It is a big question around women in the workplace. Right now, our routines are out of kilter and we have women who are worrying about all the people affected by Covid-19, so leaving themselves with less mental bandwidth to apply for senior roles. Without a doubt that is making it harder, particularly for women."

Ms Schonhofer agrees: "All the research shows that we can maintain our energy for about eight weeks. As lockdown happened, we all had to learn about Zoom or Teams, find space in our houses to work, rearrange our lives and rearrange our work.

"It has taken a huge amount of energy and now people are dipping in energy. The message has to be that it's fine to be tired. The learning has been done; the spinning of plates has been done."