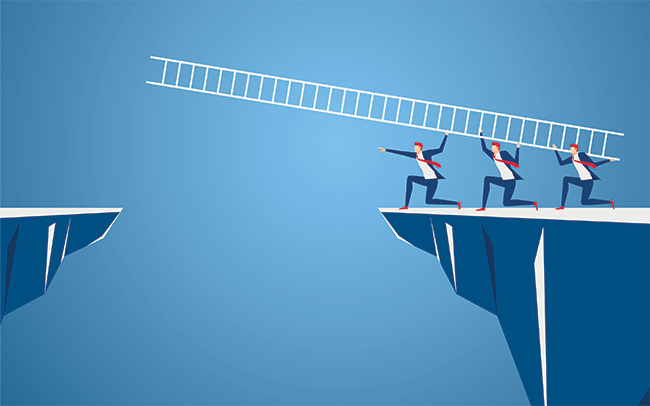 In the past 10 years, natural catastrophe losses have averaged £131 billion of economic losses a year, according to a report from Swiss Re. Of that figure, only 37% are insured, resulting in approximately £83bn of uninsured losses a year.

This gap between insured and economic losses -- the so called 'protection gap' -- is all very familiar, but new global threats such as cyber, climate change and pandemic, as we are seeing with the Covid-19 crisis, are not only expanding the scope of the term but also the scale of the issue and those who are paying attention to it.

Increasingly, addressing the protection gap is a matter of national security. To put this into context, some comparative examples illustrate the relative significance of protection gaps.

The aftermath of the 2011 New Zealand earthquake provides a good example of how narrowing the protection gap helps economic recovery. With 98% of Christchurch properties covered, this was the most insured earthquake in the world. While economic losses from the earthquake reached NZ$40bn (£20bn), equivalent to 20% of New Zealand's GDP, insurance and reinsurance claim funds enabled a relatively quick recovery.

Conversely, natural disaster events have tended to hit developing and vulnerable countries disproportionately harder due to lack of insurance. In the past 20 years, Asia has suffered almost half of the world's economic losses from natural catastrophes (more than £730bn), of which less than 5% have been insured, according to the Monetary Authority of Singapore.

Countries with well-developed economies are not immune from protection gaps either.

In the UK, 28% of households lack home insurance. Severe flooding and uninsured losses in the winter of 2019/2020 brought renewed focus on whether the UK government is doing enough to protect and support high-risk communities before and after floods.

The current Covid-19 global crisis, which is creating previously unimaginable social and economic stress, clearly illustrates the lack of resilience and preparedness within the global economic system. Insurance is playing a very modest role in helping to compensate for economic losses, but already discussions are underway in several countries to develop more capable public/private response mechanisms on an ex ante basis to manage major pandemics.

In recognition that it does not have the capital to meet the full cost of this type of global systemic event, the UK insurance sector is discussing how it could support the government to distribute the funds required to help keep the economy going, via a pandemic backstop system.

Against a background of weakening trust in governments and insurers, this type of public-private partnership could hail a new era and improve societal and economic resilience.

Yet climate change is likely to make the insurance protection gap even wider, particularly in developing countries, many of which are prone to such risks and are least financially equipped to deal with them. Health is another area with a severe and increasing protection gap. In Asia alone, the health protection gap is estimated to be £1.5trn, according to Swiss Re, and is projected to grow.

Cyber risk is also a looming threat. To provide appropriate levels of protection, it will be important to discover the point at which cyber risks can be shared between the private insurance profession and government, as a cyberattack on one part of the global network has the potential to spread widely and rapidly, causing losses that cover multiple countries and sectors.

Therefore, closing the protection gap is likely to require a multi-faceted approach that might include: improving understanding and quantification of risks through modelling to identify priority areas; reducing or avoiding exposure by, for example, avoiding construction in flood plains; increasing ex ante resilience through, for example, promotion of better building standards; and increasing ex post resilience through risk financing structures. The latter would include insurance or more innovative forms of alternative risk transfer, like parametric (re)insurance and insurance-linked securities.

At the same time, what is increasingly needed is a collective strategy that recognises that reducing the protection gap and developing an insurance culture stands to benefit economies in two key ways:

An active partnership between governments and the insurance sector is needed to deliver such benefits. When properly managed, such partnerships should be able to enhance national resilience by shaping responsible behaviours and assist in getting national infrastructure, businesses and individuals more solidly back on their feet after an event.

A number of fundamental questions remain. How far can government and the insurers protect against risk? What is a citizen's responsibility in building his or her own resilience? Where does national security start and finish? Answers will vary depending on regions, political systems and risk cultures, and international cross-industry forums will be key in sharing best practice responses.

Nevertheless, they need to urgently be addressed and governments working in tandem with the insurance sector looks to be part of the solution.

CHALLENGES IN REDUCING THE PROTECTION GAP

James Vickers is chairman of Willis Re International