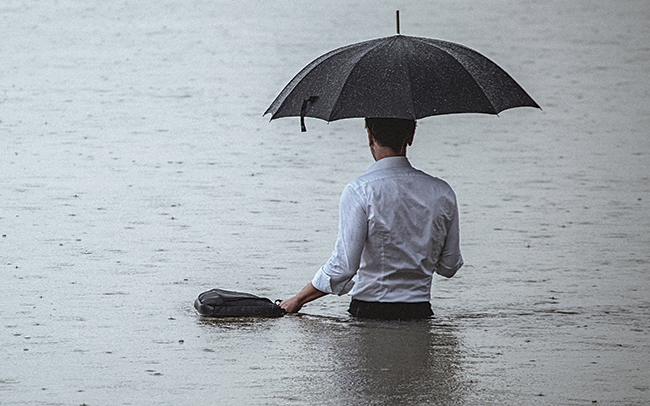 Insurers are often criticised in the wake of disasters but, as a succession of floods swept across the UK this winter, the profession was working hard to show its value in a crisis

This comes as climate change scientists warn that global warming is likely to result in yet more flooding for the UK in the future.

Following the recent storms, the UK government announced plans to almost double its spending on flood defences. There is also talk of a radical rethink on how the country manages flood protection, with a new strategy expected in the Spring (although this date is now likely to be pushed back due to the ongoing Covid-19 crisis).

Hints are emerging that the Environment Agency might move away from limitlessly high walls and towards a policy of encouraging affected homeowners and businesses to move out of flood zones -- a radical suggestion.

And it is not just the UK but much of Europe too that has been rethinking their approach to flood defences. Insurer Aon has reported that Windstorm Ciara -- also known in some locations as Sabine -- led to significant impacts across 17 separate European countries. At least 14 people were killed and major wind-related damage was incurred by property and automobiles. Preliminary public estimates by insurers placed the total insured loss at more than €1bn (£0.89bn), with the majority occurring in Germany. The total economic loss will be even greater.

Michal Lorinc, catastrophe analyst for Aon's Impact Forecasting team, says: "February was a meteorologically active month for windstorms in Europe, as no fewer than six notable storms traversed western and central sections of the continent. The most significant was Windstorm Ciara (Sabine), which became the costliest storm since Friederike in 2018.

The UK's Association of British Insurers (ABI) adds that UK insurers expect to make payments to customers hit by the recent Storms Ciara and Dennis of more than £360m. It says insurers made initial emergency payments of more than £7.7m to help flooded homeowners and businesses in the immediate aftermath of the flooding and wind damage, with repairs to many properties underway before the government's announcement that all but essential key workers should stay at home to slow the spread of the coronavirus. They have also arranged and paid for emergency temporary alternative accommodation for families whose homes are uninhabitable.

Added to that, flooding in parts of south Yorkshire and the Midlands in November last year is set to cost insurers in excess of £110m. The last time several storms of significance struck in quick succession was in December 2015, when Storms Eva, Frank and Desmond caused insured damaged valued at £1.3bn, according to ABI.

So, how is the insurance profession reacting and preparing for future events?

Flood Re -- the not-for-profit, joint initiative between government and insurers -- has launched a local campaign to raise awareness that those living in high flood-risk areas can continue to get affordable home insurance.

It says that since its launch in 2016, the availability and affordability of home insurance for householders at risk of flooding has improved significantly. Independent research has shown that 93% of householders whose property has flooded previously are able to receive quotes from five or more insurers -- compared to 0% before the introduction of the scheme -- and four out of five householders with previous flood claims have been able to find quotes that are more than 50% cheaper.

However, UK (re)insurer Aviva's global chief executive Colm Holmes has emphasised the importance of getting flood resilience right and recently called for Flood Re's insurance scheme to be extended to homes built since 2009.

Aviva, which reported heavy losses from floods last year in its recent results, is among the insurers and bodies that have been working closely with the government's Department for Environment, Food and Rural Affairs (Defra) on flood resilience, along with the CII.

BREAKING THE FIGURES DOWN

Figureheads from across the insurance profession got together to mark the launch of the property flood resilience code of practice, hosted by Business in the Community (BITC) at the House of Commons on 10 February -- the day that Storm Ciara hit.

The code is funded by Aviva, the Environment Agency, the Welsh government, the Department for Infrastructure, Scottish Government and is supported by the Chartered Institution of Water and Environmental Management, the Institution of Civil Engineers and the Royal Institution of Chartered Surveyors. Further support and review was provided by a project steering group made up of 55 members from across industry, academia and the public sector.

A spokesperson from the CII says: "With Storm Ciara hitting the UK on the same day, the need for a profession-wide set of guidance and standards is more crucial than ever. At present, there is a lack of regulation and accepted standards around the specification and deployment of property flood prevention, limiting its potential positive impact."

While not all flood damage can be prevented, it can be limited. Flood resilience should have a tripartite approach: the government, insurance and the customer. The code sets out six standards, each with an aim and number of requirements that need to be met:

Some of the recommended precautionary measures include:

With an increase in the number of similar storms likely due to the increasing threat of climate change, it is hoped that this code will help individuals and businesses understand the practical measures they can implement. This should then help to restore them quicker.

In addition to the code, two complementary guidance documents have been developed, one aimed at planners and the other aimed at homeowners and businesses. â