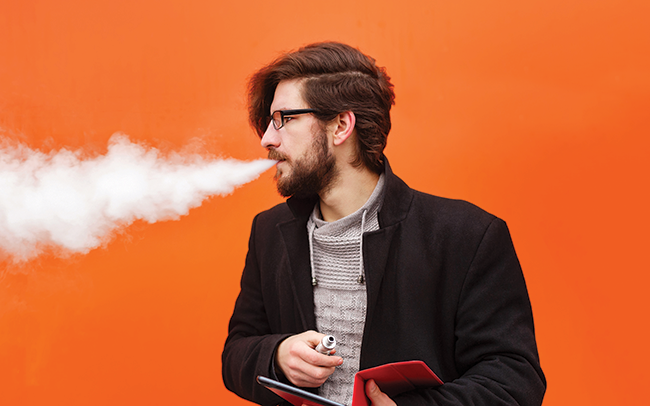 Assessing the cover needed to deal with this emerging risk

Simoney Kyriakou asks if current levels of cover will be enough to stub out the emerging risk of e-cigarette claims?

E-cigarette company directors need to make sure they are properly insured, not just for the emerging risk of claims relating to the negative health consequences of vaping but also for the possibility of outright bans on some, or all, of their products.

The UK and the US are responding to vaping concerns in quite different ways. In the US, medical centres of excellence such as Johns Hopkins University have warned of links between lung disease and vaping. And a rise in underage nicotine addiction from extra-strength e-cigarettes has been reported by Harvard, while subsequent vaping-related deaths in the US -- 42 now, with more than 2,100 reported lung injuries -- have led to the Centers for Disease Control and Prevention issuing an official warning against e-cigarettes. As a result, the US is banning the sale of non-tobacco-flavoured e-cigarettes.

The UK's approach is different. In the same week that the media reported on Belgian teenager RaphaÃ«l Pauwaert, who died of pneumonia linked to e-cigarettes, and ran a story on 16-year-old Briton Ewan Fisher developing a vaping-linked respiratory disease, the papers also highlighted a study by Dundee University, which suggested switching to vaping was positive.

"Switch to vaping 'helps smokers' hearts'", the BBC wrote, while The Times ran the headline: "Health of smokers 'improves in weeks' after vaping switch". Although the caveat was that e-cigarettes were healthier only in relation to tobacco products, this highlights a more casual attitude in the UK.

In fact, the 2019 Epicenter Nanny State Index, published by the Institute for Economic Affairs, shows the UK is the most liberal country in Europe when it comes to e-cigarettes.

Across the rest of Europe, 14 countries include vaping in their smoking bans and 15 have a full ban on e-cigarette advertising.

Whether the UK is right to be more sanguine about e-cigarettes or not is a moot point; there is a swelling tide of anti-vaping sentiment and businesses must meet this head-on or be overwhelmed.

If more people are vaping and more associated health problems are being reported, what sort of risk assessment needs to be carried out on the thousands of businesses springing up around the e-cigarette industry?

The Independent British Vape Trade Association (IBVTA) promotes on its website the benefits of ensuring proper cover against future liabilities of negative health consequences of vaping.

HOW MUCH IS ENOUGH?

The question now is will existing cover be enough to protect revenues, given the uncertainty? For example, internet sales may well falter now that Apple has removed vaping apps from its store -- have UK firms factored this into their cover?

Of the threats listed by the IBVTA, product liability looks to be most important as it is likely that a raft of personal claims relating to ill health caused by vaping will start coming through the pipeline. Already, manufacturers, distributors, suppliers and retailers can be held responsible for product-related injuries, or damage to property caused by products.

Yet, as IBVTA-accredited broker Anthony Jones' website states: "As ingredients and contaminants have not yet been fully evaluated or regulated, there is still debate around inhalation, ingestion and skin absorption exposure." As a result, a lot of risk cannot be quantified. What if new bans also cause business interruption and loss of income?

Warning of the dangers of underinsurance, Steve Green, a director at Anthony Jones, tells IBVTA members: "I always advise customers to avoid the dangers of falling into the 'just' trap. Using the word 'just' implies a level of simplicity to overcoming potential issues and [assuming] that you will have the answers to any issues that do present themselves."

The US may have gone too far but as Roy McLoughlin, associate director at Cavendish Ware, comments: "It only takes one death to make the headlines before things change." He thinks, at the very least, the UK will see claims made under life and health policies, and if insurers are not already tackling vaping risks, it will soon become "standard practice -- 100%". He adds: "The minute people die from vaping, it will be factored in."

In November 2018, UnderwriteMe's Underwriters Forum survey predicted that vaping, genetic testing and wearable tech will have the biggest impact on underwriting insurance. If so, it will not be long before UK vaping manufacturers and retailers start fielding claims from ambulance-chasers on the one hand, and tackling a drop-off in revenue and rising regulation on the other. These risks must covered, or many UK firms could see their profits go up in smoke.

Products offered by brokers for businesses involved with e-cigarettes include cover for:

Simoney Kyriakou is a freelance journalist