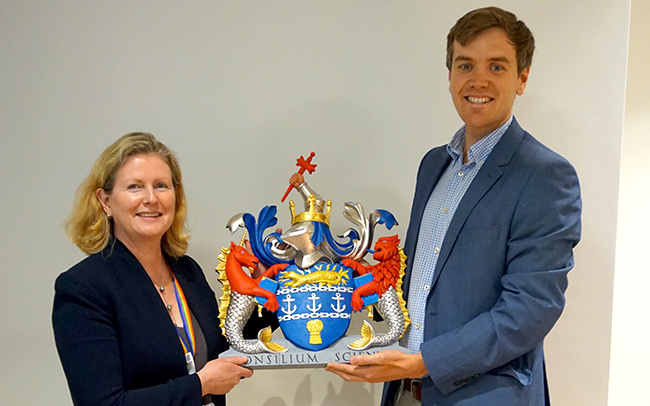 Alongside the historic artefacts on display at the CII's London head office, there is now a new object set to capture the attention of members.

The entrance hall of the Lombard Street office now features a new wooden carving of the body's historic Coat of Arms.

The Coat of Arms was produced by William Barsley, who five years ago retrained with the City and Guilds of London Art School so he could leave his office desk job at the United Nations in Rome to become a professional woodcarver.

Mr Barsley, who at the time of The Journal going to press was spending his nights carving at the Houses of Parliament, said the carving of the CII's Coat of Arms took him roughly one month.

Around 60% of the time it took Mr Barsley to produce the Coat of Arms was spent carving Quebec pinewood, with the other 40% spent on painting and gilding the fish scales, helmet, crown and arm with a combination of gold, caplin and palladium metal leaf.

He gilded the Coat of Arms using the traditional method of water gilding, in which layers of gesso (made from rabbit skin glue and whiting) are built up before applying the metal leaf.

Mr Barsley said: "As with most of my work, this piece was bespoke, so I had never carved this particular design before. For me, this is what adds real excitementto the process.

"I therefore usually make a one-to-one model in clay before starting to carve the wood, to ensure any scale or design issues are fully resolved. On this particular piece, one fun challenge was jointing the sword onto the armoured hand and ensuring it lined up perfectly."

When the CII rebranded in 2017, the Institute's Coat of Arms was updated to deliver a distinctive and contemporary illustration of the body's rich heritage.

So, what does Mr Barsley hope visitors to the CII's offices will take away from looking at his new carving of our historic Coat of Arms, alongside the many insurance artefacts on display in Lombard Street?

He said: "My hope is that the Coat of Arms I have carved for the CII portrays the history and quality of the institution, as well as celebrating the playful side of heraldry through the heraldic beasts."

Mr Barsley also revealed that the fact he has carved the Coat of Arms is also likely to be a source of pride to his family, as he believes his grandfather John Plumer achieved one of the quickest acceptances as a Lloyd's broker.

He said: "It was a great connection to have made the CII Coat of Arms. I am sure he (my grandfather) would have been happy."

You can see more of Mr Barsley's work by visiting: www.williambarsley.com and you can view the Coat of Arms at the CII's Lombard Street offices.

Sword and hand: The hand grasping the blade of the sword of St Paul's, rather than the hilt, is symbolic of the weapon being neutralised. This is aligned to the fundamental purpose of insurance being to mitigate harm and hurt.

Supporters: The unicorn and lion (termed 'supporters') represent the national role that the CII plays; the royal lion of England and the unicorn of Scotland. Both creatures are depicted with fish tails.

Book: The open book between supporters symbolises the Institute's role as a professional body responsible for career guidance, education and the award of qualifications, which demonstrate the principles that govern insurance and financial planning practice.