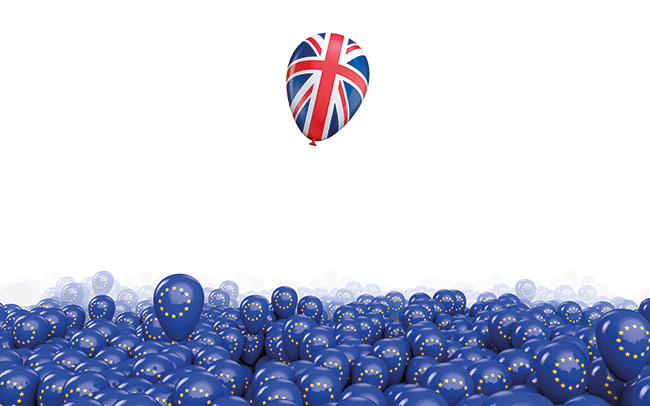 Launched amid the ongoing turbulence in Westminster around the Prime Minister's negotiated EU withdrawal agreement and the uncertainty at the time of writing that still hangs over the UK's exit from the
EU, it is perhaps unsurprising that the latest edition of the CII Economic Outlook Survey reveals that the confidence CII members have in the future of the UK economy has fallen to the lowest levels since the survey was first conducted in 2011 (see Figure 1).

The improvement in economic and business prospects observed in last year's survey now appear to have been a temporary respite from a more sustained drop in confidence, as the expectations of CII members have fallen considerably below levels seen in 2016 immediately following the referendum, before the formal Article 50 negotiation window had commenced. 68% of respondents now say they believe the UK economy is somewhat or significantly deteriorating. This is above double the proportion from last year. Just 12% of CII members surveyed believe the economy is improving, nearly two thirds less than in the survey conducted 12 months earlier. Just 20% of respondents feel that the economy and business outlook is stable for the year ahead. This is a 17 percentage point reduction from 2017.

It would be difficult to separate entirely this fluctuation in economic sentiment of CII members from the perceived course of the UK's negotiations to leave the EU. A sudden drop in economic confidence mirrored the uncertainty that surrounded the immediate aftermath of the referendum, and a year later this sentiment had seemingly made a partial recovery as the UK Government's Brexit narrative had become clearer and as sufficient progress had been made in negotiations to warrant discussions moving onto the terms of the transition period within the deal.

Yet the drop in economic confidence highlighted in this year's survey results only mirrors that of households across the country, as consumer and business indices also continue to show falling confidence concerning the UK's economic outlook. The Centre for Economic and Business Research (CEBR), the economists the CII partners to conduct the survey, note that in December 2018, consumer confidence fell to its lowest level since May 2013. Figures published since by the Office for National Statistics reveal that
UK economic growth slowed to just 0.2% in the final quarter of 2018 and that annual domestic GDP growth for 2018 was 1.4%, the lowest recorded since 2012. Annual services sector growth was 1.7%, the lowest since 2011. It would be hard to argue that the Brexit impasse is not impacting on levels of economic activity in the UK at the time of writing.

Despite a less optimistic view of the economy, the employment prospects of CII members by comparison are relatively positive, with 31% of members believing their prospects to be more positive than a year ago, while 47% believe their employment prospects to be similar to last year. Again, this response is consistent with the strong labour market performance in the UK in 2018, when the unemployment rate stood at 4.1% in the three months to October, having fallen to 4.0% in summer 2018, its lowest level since 1975. Still, compared to earlier years, the latest survey results appear more subdued. 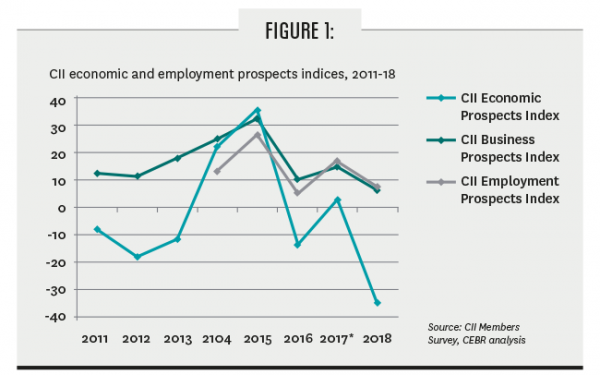 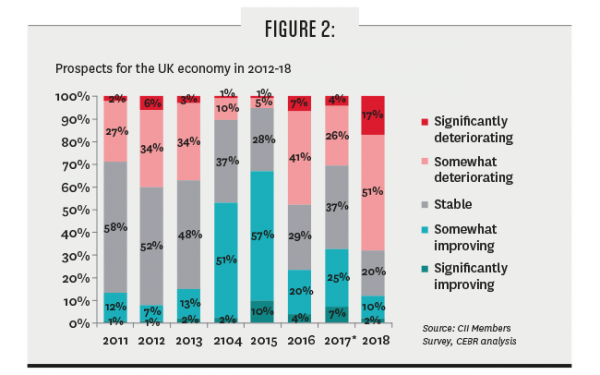 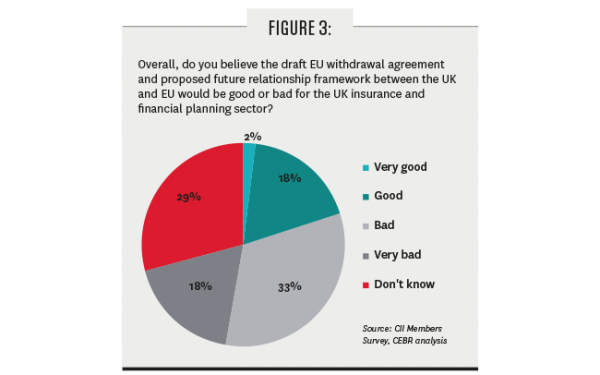 Across all survey respondents, just 11% agree that Brexit is making the UK a better place to do business for their firm. Some 51% disagree with the statement, a 10 percentage point increase from last year.

Overall, 50% of survey respondents hold the view that the most significant opportunity for the sector presented by Brexit is the chance to secure a regulatory regime that is appropriate for the UK, compared to other options such as a chance to benefit from closer bilateral ties with non-EU markets (36%); a chance to introduce more market friendly legislation and reduce taxation (35%); and a chance to implement a migration system that focuses on attracting the skills that are needed in the sector (32%).

When CII members were asked for their views on the UK government's negotiated withdrawal agreement and accompanying political declaration, which was overwhelmingly rejected by MPs following an initial postponement of the 'meaningful vote' in the House of Commons, 51% of respondents said the draft deal would be 'bad' or 'very bad' for the UK's insurance and financial planning sector, whereas just 20% said the deal would be 'good' or 'very good'. This is a reflection at the time of the survey of widespread concern across the UK, irrespective of political party or opinion, that the deal negotiated by the Prime Minister is unacceptable, despite a recognition of the opportunities presented by Brexit. For financial services in particular, there is an anxiety that the draft deal could leave the sector controlled by EU regulation without the ability to contribute to its formation. Ironically, this would hinder the opportunity identified by members as the most important following Brexit -- that is, the UK's ability to implement its own regulations in the sector.

Interestingly, almost three in 10 (29%) respondents did not have an opinion on what the effect of the deal would be, highlighting the lack of clarity of the proposed deal as it relates to insurance and financial services more widely, and which is also perhaps a consequence of the 'non-binding' nature of the political declaration on the future relationship between the UK and EU, which at best contains only vague commitments to the type of partnership both parties will "endeavour" to achieve in future discussions.

In an attempt to look at life beyond Brexit, CII members were also asked for their thoughts on skills in the sector.

The majority (55%) of CII members surveyed do not believe they have the correct skills for the future of technology in the insurance and financial planning sector. But encouragingly, this total consists of 47% of respondents who believe this can be rectified through retraining to develop their missing skills. Overall, at least 85% of respondents in each sub-sector felt they either had the digital skills required, or would be able to obtain them with training.

Interestingly, when analysed by hierarchy, nearly double the number of students and trainees and significantly more staff in non-management roles surveyed considered they had the digital skills needed for the future digital transformation of the sector, compared to senior management or executives. There is some cause for optimism too in that the majority (51%) of CII members surveyed do not believe their job is in danger due to the adoption of AI, automation and similar technological advancements -- compared to 29% that do. 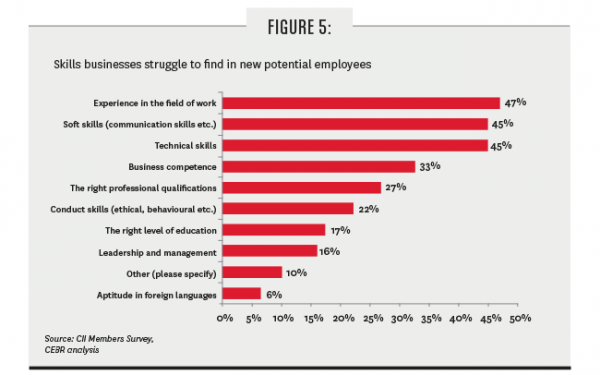 Some 57% of respondents agreed that their firm is adapting to the needs of the digital economy, versus just 16% who disagreed. Separately, 71% said their firms were providing sufficient continuing professional development (CPD) and training opportunities in line with this. Members in senior management positions and above were also asked to consider the skills they struggle to find in potential new employees. Figure 5 shows that experience in the field of work is the most highly sought-after skill that businesses struggle to find in potential new employees, while soft skills are joint second with technical skills.

The results also highlight that despite technological advancements, the importance of soft skills and relevant experience will continue to be highly valued in future. Crucially, employees with a combination of both new technical skills and well-rounded soft skills will be essential for future development in the sector.

Compared to previous years, the latest CII survey results show a noteworthy fall in optimism, as illustrated in Figure 1. The share of CII members expecting a significantly deteriorating or somewhat deteriorating economy is the highest since the survey began in 2011. Meanwhile, the share of members expecting the economy to significantly improve is the lowest since 2015 and the joint second lowest on record. Whereas last year showed a more even split in members' thoughts regarding whether the economy would improve or worsen, this year there is a definite consensus among CII members that the economy is on the decline. â