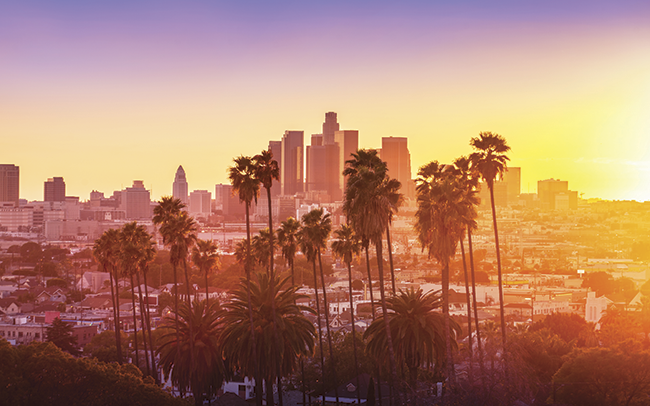 As the largest state economy in the US, California holds plenty of promise -- but what does its insurance market look like? Jay Patel finds out-¦

California is the most populous state in the US and its economy is the largest. Based on some measures, it is the eighth largest economy in the world with a gross domestic product of $2.6 trillion in 2016.

The rapid evolution and growth of the technology industry has drawn money into the Californian economy (particularly Silicon Valley) and attracted the best and brightest minds from around the world. This secular change in the Californian economy, coupled with the desirability of the 'Golden State' as a place to live, has contributed to fast-growing real estate values. Numbers from Paragon Real Estate Group's report on the San Francisco real estate market reveal that the price of the median house has more than doubled in the space of two years. The attraction to insurers of rising property values is dented somewhat by California's environment, which throws up a range of natural and man-made hazards that have resulted in large losses in the past.

The location of California on the San Andreas Fault exposes it to the risk of a major earthquake. Despite homeowners' insurance not covering earthquake risk, insurers of these policies are obligated to offer separate policies. This additional cover was affordable until 1994, when the Northridge earthquake resulted in claims of $12bn. In the aftermath, premiums and deductibles rose sharply, reducing the coverage available. This led to the creation of the earthquake insurance pool known as the California Earthquake Authority.

Another risk that is facilitated rather than created by the geography of California is wildfires. About 45% of California's total surface area is covered by forests and coupled with a climate prone to drought and prolonged spells of dryness, the risk of wildfires in the state is high.

The final months of 2017 were marred for thousands of Californians by a number of destructive wildfires. In spite of a heavy rainy season last year after years of drought, the dry summer that followed led to a drying of vegetation.

The favourable conditions for wildfires in Southern California, which struck in December 2017, were exacerbated by the Santa Ana winds (strong and very dry winds that originate inland from the Great Basin). The ferocity and dryness of these winds dried out the vegetation further and spread the fires more quickly across the wildlands and into urban areas.

Similar conditions existed in Northern California, where the wine country suffered from wildfires a couple of months earlier. Dry conditions created the ample fuel for fires to spread and the presence of Diablo winds had a similar effect on the fires, assisting their expansion over what eventually amounted to 245,000 acres of land.

As of 31 January 2017, 45,000 claims were made due to the wildfires that occurred in October and December. These claims totalled $11.79bn in direct incurred losses, according to the California Department for Insurance (CDI). The residential personal property line of business accounted for 90% of these losses.

Although the CDI has emphasised in the aftermath of the fires that the sector is sufficiently capitalised to handle these losses, property insurers that provide coverage in the risky areas in California will look to recover underwriting profitability in the coming years. There have been concerns that homeowners in California already struggling to access affordable homeowners insurance before the fires, will find it even more difficult. 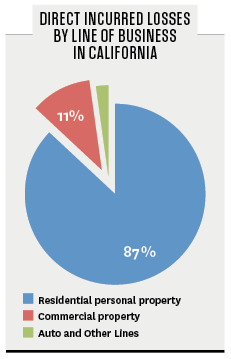 In December 2017, the CDI published a staff white paper on the availability and affordability of residential property insurance in high-risk areas of California. It defines these at-risk areas as the wildland-urban interface (WUI) and says there are 3.6 million homes in California located in the WUI.

There are a number of key findings from the paper, that highlight how it is increasingly difficult for residents in the WUI to access coverage for their property and contents. Examples of this include insurers pulling back from new business and renewals in parts of the WUI, or increasing premiums and wildfire surcharges significantly.

One reason cited for the contraction of coverage is the accuracy and rigidity of the wildfire risk models used by insurers to rate residential properties. The paper suggests that these models do not take into account the mitigation measures taken by individuals and the community.

As part of a solution to overcome the reluctance of insurers to offer coverage to at-risk residential homeowners, the paper suggests increasing awareness among agents and brokers of excess and surplus lines and the FAIR Plan (an association of all insurers authorised to provide property insurance as a last resort in California). Another action that had been taken was to authorise new insurers to enter the market, such as the approval for Spinnaker Insurance to offer cover for properties in the WUI.

The wildfires in December included the largest wildfire in California's recorded history. The Thomas Fire burned more than 280,000 acres in Santa Barbara and Ventura countries. In January, storms descended upon Southern California and the water descended Montecito, picking up debris (soil, rock and other objects). This debris flow (mudslide) struck Montecito and caused the destruction of homes, infrastructure and ultimately lives, with a death toll of more than 20.

Interestingly, it is thought that the Thomas Fire is thought to have played a crucial role, as it had charred the soil, making it more slippery and more prone to erosion. These conditions created an environment that allowed the mudslide to develop and become heavier, which in turn increased its momentum until it struck the affluent community of Montecito.

California's insurance market is the largest in the country. The non-life sector recorded direct written premiums of $72.5bn in 2016, which equates to 12% of the US non-market according to the National Association of Insurance Commissioner's latest statistical annual statement. The next largest market is Texas with $51.1bn in direct written premiums.

There have been criticisms of the regulatory environment for insurance companies in the state being too constrictive and, as a result, causing underperformance.

A report by the R Street Institute (a free market thinktank) published in December 2017, examined the regulation of insurance across all 50 US states.

The report cites practices such as choosing of the insurance commissioner via electoral means and the practice of mandating the approval of insurers' rates before they are allowed to use them, as two key reasons for its position at the lower end of the grade scale, as reasons for its low ranking of California regulatory system.

Given the issues regarding the affordability of residential property insurance was already an issue before the destruction wreaked by the wildfires in recent months, it could be argued that a more muscular regulatory approach to protect the wealth and wellbeing of Californian residents is a necessary path for the CDI to take.