No Spain, no gain 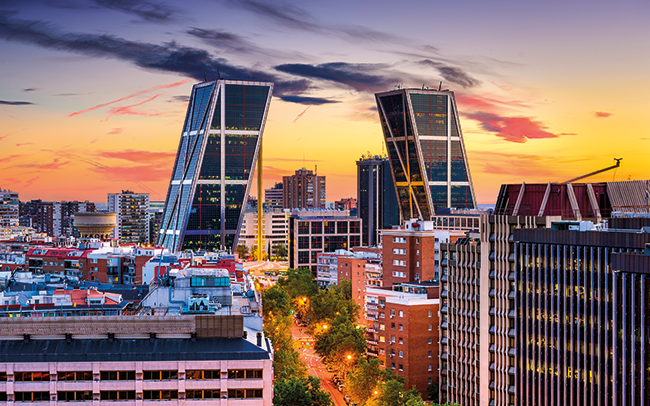 The Spanish economy grew by 3.2% in 2016 and is on course to grow at a similar rate in 2017. The robust growth of this economy is of course partly due to the severity of the downturn that ended only as recently as 2014. However, there is also much to say for the improvement in Spain's competitiveness (unit labour costs have declined for six consecutive quarters since the beginning of 2016) and the accommodative monetary policy from the European Central Bank (ECB) that has boosted demand across the eurozone, and until 2017, also assisted growth via depreciation in the euro.

This economic backdrop has enabled the federal and regional governments of Spain to maintain fiscal discipline by reducing deficits, as growth has been supported by an impressive growth in net exports as the current account has moved from a deficit of 7% of GDP in 2012 to a 2% surplus.

A major reason for the strength of the recovery is because the economy already had a relatively (by European standards) competitive industrial base before the crisis. It was the large levels of borrowing by regional governments and property developers to fund ill-advised construction projects that resulted in vast deficits for regional governments and concerns in the banking system over lenders suffering from the deteriorating property values.

This meant the federal government had to increase its level of borrowing to bail out the banks and regional government, leading to Spain being drawn into the sovereign debt crisis.

The austere fiscal policy imposed by the federal government in Madrid to meet bailout conditions imposed by the ECB and International Monetary Fund, contributed to resentment towards Madrid in Catalonia, which in turn was a key factor behind the independence referendum held on 1 October 2017.

Although it seems that at least in the short term there is no prospect of Catalonia becoming independent, it is expected that there will be an impact on economic growth. Luis de Guindos, the Spanish finance minister, recently stated that GDP growth has been lowered by 0.4-0.5% due to the referendum.

This change in forecast may have implications for the targets of non-life insurers with operations in Spain and particularly in Catalonia. However, looking to the UK and the issues insurers are facing in figuring out how cross-border policies would and could be honoured, things could be a lot worse.

As the chart below shows, motor insurance was affected more negatively than property insurance during Spain's recession.

Motor gross written premiums fell at a rate of 2.5% per annum during the course of the five years. Only in the 2014-2015 period was there a modest rebound in premiums. The decline in passenger car registrations looks to have played a large role in this. According to data from Statista, new passenger car registrations fell from 985,287 in 2010 to 723,948 in 2015. The squeeze on real incomes and rising unemployment in this period, coupled with tighter lending conditions, dramatically impacted demand for new cars, thus contributing to a fall in motor insurance premiums.

Since 2014, both lines of business have grown as GDP growth recovered, thus lowering unemployment, boosting incomes and commercial activity.

In the case of motor insurance, there have been other macroeconomic drivers such as the fall in the price of oil between 2014 and 2016, which greatly reduced the cost of vehicle transport from a personal and commercial perspective. This, along with the growth in the number of vehicles on the roads, led to an increase in claims which exerted upward pressure on premiums, at the same time demand grew. Furthermore, according to a report on the Spanish market by Mapfre Economic Research, upward pressure on premiums also arose from "the updating of market tariffs in response to the increase in compensation following the entry into force of the new automobile fees scale".

During the past five years in Spain there has been consolidation in the financial sector, as some of the weaker financial institutions have been bought by larger players. In the banking sector, one of the more recent instances of this has been Santander's rescue of Banco Popular in July 2017.

The Spanish government -- keen not to commit any more public money to bank bailouts but also keen not to introduce any more risk into the banking system -- has, like other European governments, been more relaxed regarding the competition concerns that surround such consolidation. There has also been cross-border retrenchment as many banking entities seek to reduce their global footprint in aftermath of the crisis. Barclays, for example, recently divested a number of its businesses in the Iberian region, including some insurance operations.

This consolidation in the financial sector has also had an impact on insurance. Many of the largest banks in Spain have their own insurance arms or bancassurance agreements. Therefore, when consolidation has taken place, the new group tends to streamline its bancassurance offerings to maximise cost synergies that would have been part of the deal rationale. This in turn has reduced the choice for consumers among larger insurers.

The concentration ratio for the 10 largest non-life insurers in the Spanish market has increased from 58.9% in 2011 to 62.0% in 2015. While the ratio for the five largest firms in the sector rose from 41.6% to 44.3%, according to Timetric's Insurance Intelligence Center data. This shows that the concentration has been focused on the five largest players on the market as they continue to accumulate market power at a steady pace. 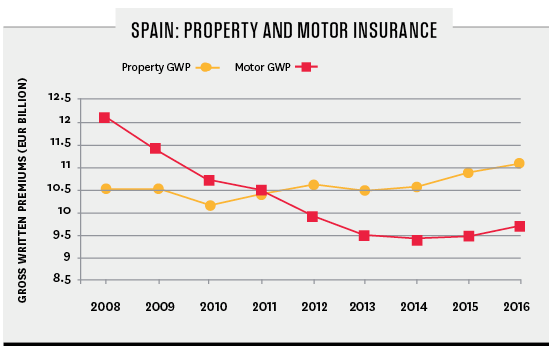