Hung out to dry

The general election of June 2017 turned out to be far from the landslide many had predicted. Lawrence Finkle examines what the result means for the country and the insurance sector in particular.

The general election of June 2017 will ultimately be remembered as the gamble that did not pay off.

Called by Prime Minister Theresa May to secure a personal mandate for Brexit negotiations, the British public instead responded by weakening her authority in the House of Commons. The Conservatives won 318 seats, 13 less than the administration that it replaces and eight short of the magic total of 326 required to form a majority government.

Shortly after the results were counted, the Prime Minister announced that she would seek to form a minority administration with the Conservatives' natural allies, Northern Ireland's Democratic Unionist Party (DUP), who with 10 seats in the Commons would help secure the Conservatives enough seats to form a government. The two parties will not enter a formal coalition agreement, as between the Conservatives and Liberal Democrats during 2010-2015, but will instead seek to join in a more informal 'confidence and supply' arrangement -- where the DUP, in exchange for a part in government, agrees at minimum to support the Conservatives on its Budget and any other votes in which other political parties propose to bring it down.

The election was intended to ensure that disunity in parliament would not threaten the legislative programme Brexit necessitates and, above all, would not lead to the rejection of the negotiated settlement. What this parliamentary arithmetic makes abundantly clear is that this arrangement is far from Ms May's promise of "strong and stable". The Queen's Speech -- where the government seeks a majority in support of its annual legislative plans -- is the first parliamentary test of its durability. The passage of the speech takes on heightened importance in a hung parliament, with the Prime Minister faced with the very real threat that an unsuitable legislative package could -- if rejected by parliament -- render her unable to govern.

There were also two bills introduced in the 2016-2017 parliament that did not meet the timetable to be approved before the general election was called, which the insurance profession will hope are brought back onto the agenda.

The more controversial policies contained in the Conservative manifesto -- such as what has become widely known as the 'dementia tax' and the pledge to scrap the 'triple lock' on pensions -- that were to be implemented in the event of the Prime Minister's 'coronation', have far less chance of retention. However, the tough stance on corporate excess that became a crucial plank in Ms May's pitch to become leader of the Conservative Party -- reflected in the promise to legislate to make executive pay packages subject to strict annual votes by shareholders and to ensure the representation of employees at board level at listed companies -- may well survive in a diluted form to demonstrate that steps are being taken to help create a "country that works for everyone". 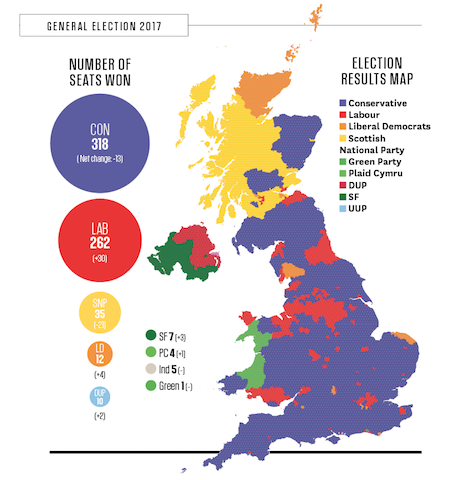 The government's legislative programme was always going to be dominated by Brexit. The introduction of the so-called Great Repeal Bill -- conceived to impose all laws signed up to during 40 years of EU membership into UK domestic statute -- will be accompanied by a pledge to bring forward a number of additional bills to ensure that the legal groundwork is prepared for the UK's departure from the EU.

The Prison and Courts Bill could provide the vehicle to swiftly reform the Ogden discount rate -- used to help calculate lump sum payments of damages in personal injury claims -- which was controversially cut from 2.5% to -0.75% in March of this year, contributing to the increased cost of insurance for motorists, businesses and taxpayers. The bill also proposes capping compensation for minor whiplash injuries, which should disincentivise fraudulent and exaggerated claims-- helping insurers save on claims costs and result in lower premiums.

The insurance profession is passionate that the UK should lead the development of driverless technology to significantly reduce accident frequency and improve mobility for more vulnerable customers. Proposals include extending compulsory motor insurance to cover autonomous vehicles when they are operated in automated mode via a single insurance product, which would cover an individual driver when driving and the autonomous vehicle when in automated mode.