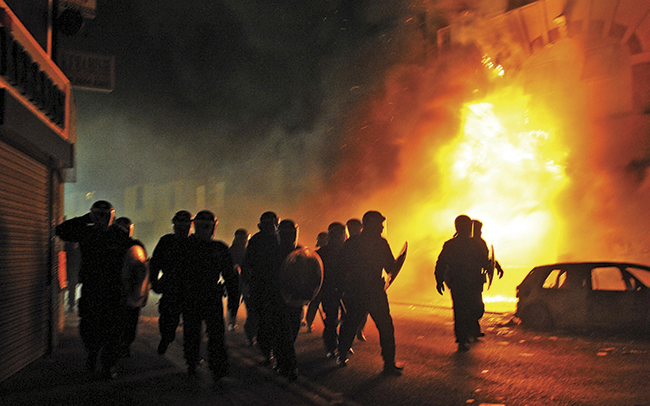 The Claims Faculty New Generation Group was challenged to make a difference to customer outcomes as part of the CII's annual talent development programme, and their work supporting the Riot Compensation Act will certainly achieve that, as Ant Gould reports.

In August 2011, riots affected areas across England and claims were made against the police, leaving police forces with a large bill. As of September 2013, payments by insurers totalled £135m for property damage and £30m for business interruption. Uninsured losses increase these figures even more. It would be an understatement to say that the handling of these claims was chaotic. How could it be anything else when the legislation was more than a hundred years old and still referred to pounds, shillings and pence?

In November 2013, former civil servant Neil Kinghan led an independent review of the Riot (Damages) Act 1886, and in his report published a number of recommendations, resulting in the introduction of the Riot Compensation Act (RCA) 2016.

While the RCA introduced a number of changes, including a provision for the Secretary of State to put in place a Riot Claims Bureau (RCB) to handle riot compensation claims where widespread civil disturbances occurred, it provided little detail around how such a bureau would work in practice.

One of Mr Kinghan's recommendations was the creation of a guidance manual, which would support RCB staff in handling riot claims. This is where the members of the Claims Faculty New Generation Group spotted an opportunity to provide assistance and expertise for their project -- a key part of the CII annual talent programme.

After more than 18 months' hard work -- in their spare time -- the group has produced a guide that can be used by those handling riot claims as part of a 'claims authority' -- this could be people working for a local policing body, or in the scenario of a large-scale event where a bureau is set up, handlers from insurance companies or loss adjusters.

The guide sets out the core procedures and technical guidance for handling of riot compensation claims, developed in line with an overarching claims philosophy.

Throughout the group's project, the claimant remained at the forefront. The group developed a claimant-centric philosophy for the guide and ensured that all recommendations adhered to a guiding principle of fairness and efficient handling.

The group ensured alignment with the development of secondary legislation by working closely with the Home Office. This was a particularly interesting and enlightening process as they had the opportunity to see how regulations are created, and to influence that process by providing their insurance expertise. They also engaged throughout the process with other key stakeholders, including police forces, Mr Kinghan, the Association of British Insurers and the Chartered Insitute of Loss Adjusters.

SO WHAT ARE THE RESULTS?

While the guide will only be tested in the event of a riot, its impact is significant because its creation goes some way to addressing a key criticism of how claims were
handled after the 2011 riots -- the lack of preparation.

Mr Kinghan stated in his review that "it would be unacceptable to be so unprepared again", and the availability of the guide should ensure that claims processes and principles can be implemented quickly following a future event. It should help police staff with no experience of handling such claims to build a clear understanding of the process, and give loss adjusters dealing with claims on behalf of the police a clear and early understanding of how the legislation will be interpreted.

The content will be immediately accessible, with the Home Office confirming that its use will be promoted to police authorities, and the guidance will be seen as representing best practice from a government perspective.

Ant Gould is director of faculties at the CII

In addition to the Riot Claims Handling Guide, the group has written a report with 15 major recommendations from the design, management, assessment and review of the claims authority through to the use of loss adjusters. Two of the recommendations are on the use of social media, and the creation of a centralised social media strategy aimed at supporting those impacted by rioting in how to make a claim.

The group also believes social media could be used as a tool to discourage criminal behaviour, by making use of insights on how positive and targeted social media messages could be used during a riot event, to help improve the decisions made by those who may otherwise be encouraged to take part in criminal activity. Such messages could be communicated via community leaders, and could highlight the potentially severe sentences that apply to riot-related offences and the devastating impact such actions can have on the local community.