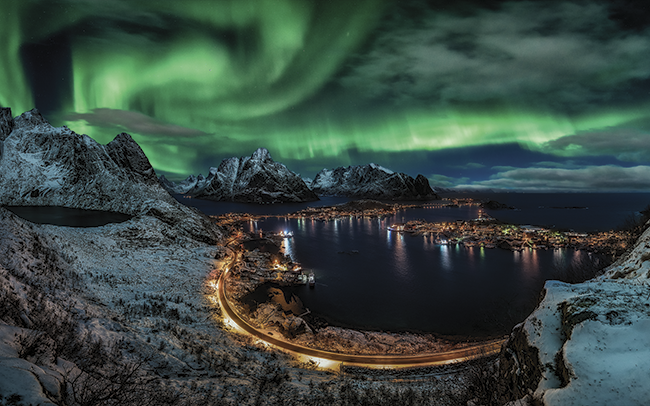 As Britain prepares to leave the EU, Jay Patel takes a look at Norway's relationship with trading bloc and the state of its economy.

In light of the triggering of Article 50 by British Prime Minister Theresa May on 29 March 2017, the range of trading and economic relationships the EU shares with other nations and regions around the world has come under renewed focus from politicians, business and the media, all looking to gain insight into what a post-Brexit UK-EU settlement would look like. The EU's relationship with Norway was the post-Brexit model most frequently cited by the European business community, as its preferred relationship between the UK and the EU.

IN THE BUILDING BUT NOT IN THE BOARDROOM

As a member of the European Economic Area (EEA), Norway is part of the EU's internal market (with a few small exceptions). This means that Norwegian insurers can take advantage of the harmonised regulatory environment within the EU, including the use of the financial passport.

Norwegian consumers of insurance (including businesses), on aggregate, benefit from the freedom for European insurers to enter the market and this can benefit them through greater competition and economies of scale, which can increase coverage while keeping a ceiling on premiums.

The main caveat with EEA membership is that Norway has no say on the development of any new EU laws or directives. However, there are instances where the enforcement of EEA rules in insurance has not been robust enough to preclude Norway from indulging in behaviours not strictly aligned with the principles of single market membership. 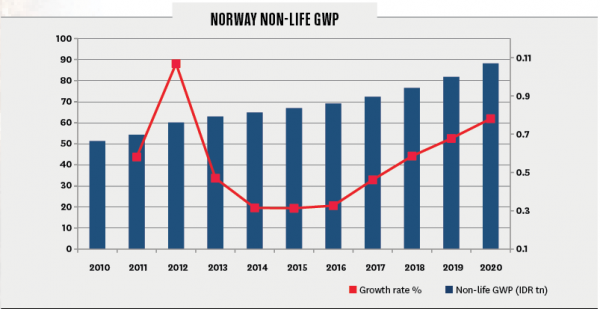 Norway's oil and gas sector accounts for 22% of the country's GDP. These reserves have provided -- and continue to provide -- a source of projects for commercial insurers to cover. The kind of offshore operations involved in extracting resources buried underneath the North Sea create a wide range of insurable risks, from standard insurance of the property used for extraction and production to the more complex architectural, engineering and environmental risks that companies in the sector are obliged or advised to purchase.

Therefore, the fall in oil price since mid-2014 from more than $100 a barrel to fluctuating in the $40-$60 per barrel range (for a period even dropping below the $40 floor), has had an adverse effect on capital expenditure as reserves previously considered viable became too expensive, so investment decisions were either delayed or cancelled. Investment (defined as gross fixed capital formation) after four years of consecutive growth declined in 2015 by -0.5% to NOK730.62bn, according to data from the Insurance Intelligence Center.

The effect of this retrenchment of investment in commercial insurance is shown by the performance of the energy insurance line in the country. Since 2011, the premiums in this line had grown robustly until they fell from NOK1.696bn to NOK1.525bn in 2015.

Furthermore, there are secondary effects on local property markets. The city of Stavanger, home to Statoil (67% owned by the Norwegian government) and commonly known as 'the oil capital of Norway', is an example of this. Figures published by Statistics Norway demonstrated an average fall in house prices in Stavanger of 5.9% between 2015 and 2016, while the rest of country saw fairly robust growth. The fall in demand for properties and subsequent fall in their values tends to act as a brake on rates and volumes of new business for insurers operating in the personal property market. 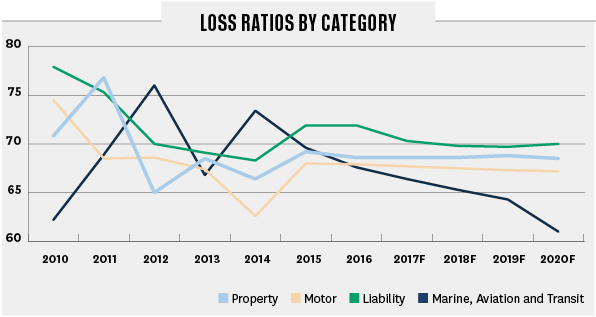 INFRASTRUCTURE INVESTMENT IS EXPECTED TO DIVERSIFY THE ECONOMY

The Norwegian government has sought to improve the economy's infrastructure to support the other sectors of its economy and it seeks to diversify away from an over-reliance on natural resources. One example of this is the government's Nation Transport Plan, which is investing NOK508bn ($86.5bn) until 2023 to develop the country's rail, road, marine and airport infrastructure, according to Timetric's Construction Intelligence Center. This should unlock constraints on domestic growth and foreign trade.

One of the more notable proposed projects involves plans by the Norwegian Public Roads Administration (NPRA) to construct the world's first floating underwater tunnel at Sognefjord, western Norway. The NPRA is planning to invest NOK198.8bn ($25bn) to implement the project, which on completion in 2035 is expected to reduce the cross-country transit time across the country's many fjords, from 22 hours to 11 hours. While there a number of practical and safety concerns that have to be convincingly answered, if the project does get the go-ahead it will present an opportunity to (re)insurers that specialise in the more esoteric construction risks.