EMERALD OF THE EQUATOR BEGINS TO SHINE 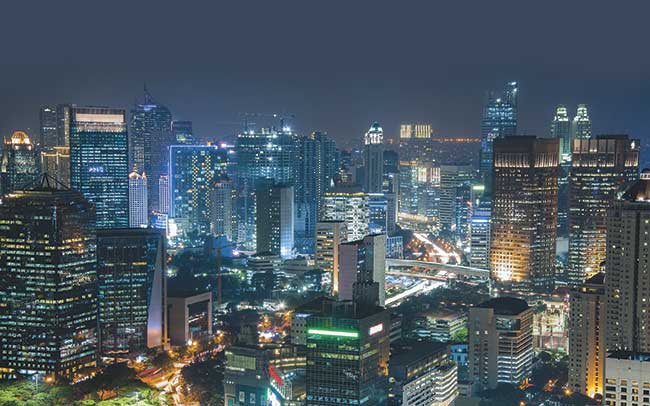 When the former President of Indonesia, Susilo Bambang Yudhoyono, tried to cut petrol subsidies in 2013, the ferocity of the protests from Indonesia's car-owning middle classes caused him a significant amount of political damage. However, when his successor President Joko Widodo all but removed all the subsidies in January 2015, he had luck on his side because the plummeting oil price reduced the saliency of the subsidy cuts.

Although there has been concern expressed recently by credit rating agencies about the political will of the government to refrain from reintroducing subsidies due to a rebound in oil prices, the decision has freed up government funds to be invested in the country's infrastructure. This investment is likely to create opportunities for insurers not only by increasing the long-term growth potential of the economy but also by providing the resources for a number of projects that will require the services of the commercial insurance sector.

Timetric forecasts growth in the construction sector to drive demand for commercial property cover. Under Indonesia's Master Plan for the Acceleration and Expansion of Indonesia's Economic Development (MP3EI) 2011-2025, the government will invest IDR339.0trn ($35.7bn) in road development projects, IDR326.0 trillion ($34.3bn) in railways, IDR117.0trn ($12.7bn) in ports and IDR31.0trn ($3.3bn) in other infrastructure construction projects by 2025.

These investments are expected to generate demand in the next few years for the range of engineering, fire and liability policies offered by commercial insurers as these projects begin to get underway. In addition, this public investment is likely to remove constraints on private enterprise thus increasing the likelihood of further investment from the private sector in building new factories and offices.

The nature of Indonesia's geography and resources makes it an economy very dependent on international trade. It exports vast quantities of natural resources and agricultural products; mineral fuels and rubber being the most prominent examples. The government is taking an active role in ensuring that growing trade volumes will not be dented by a lack of port capacity. The government plans to expand 24 seaports for handling cargo and develop 59 seaports between 2015 and 2019.

With the Chinese economy beginning to grow strongly after a slowdown in previous years and commodity prices emerging from their prolonged slump, the outlook for trade activity in the country looks good and warrants this further investment in freight and port capacity. These economic factors are expected to drive growth in the marine, aviation and transit insurance sector during the next three to five years.

Non-life insurance penetration for Indonesia was measured at 0.39% in 2015 by Timetric's Insurance Intelligence Center. This low level of penetration in a major market attracts foreign insurers from Europe and the US, as their domestic markets are much more saturated.

Earlier this year, Bloomberg reported that Axa SA, Allianz SE and MS&AD Insurance Group were all in competition to gain the rights to distribute general insurance products via Standard Chartered's outlets across the Asia-Pacific region. Another example of the foreign interest in the Indonesian market was demonstrated earlier this year when Allianz and Maybank, the Malaysian financial services group, agreed a 10-year bancassurance deal in which Allianz would distribute its life and health products.

However, there are regulatory barriers in the country that can reduce its attractiveness to foreign entrants. Indonesia continues to disallow 'composite' insurance companies. This means insurers in the country can only write life or non-life products. Therefore, foreign insurers who would like to establish a presence in both markets in Indonesia have to do so via building stakes in two different companies.

Furthermore, by the end of 2015 the Financial Services Authority of Indonesia (known as the OJK) had begun to ask insurers with foreign ownership greater than or equal to 80%, to divest their stakes. This is seen by many as the groundwork required for the OJK's objective to reduce the foreign ownership limit from the current level of 80% to (a rumoured) 49%. With recent moves by China and India -- where the foreign direct investment (FDI) limit was recently raised from 26% to 49% -- to open up their insurance markets to more foreign direct investment, the wisdom of this protectionist move by the OJK is questionable.

It must be said that these changes in ownership are likely to be phased in during a period of five to 10 years, as it is unclear whether local insurers currently have the sufficient capital required to make up for the partial divestment of foreign shareholdings. This means the overseas insurance companies will have a long period of time to build up closer relationships with their local partners and possibly maintain a greater degree of control, even after these divestments occur.