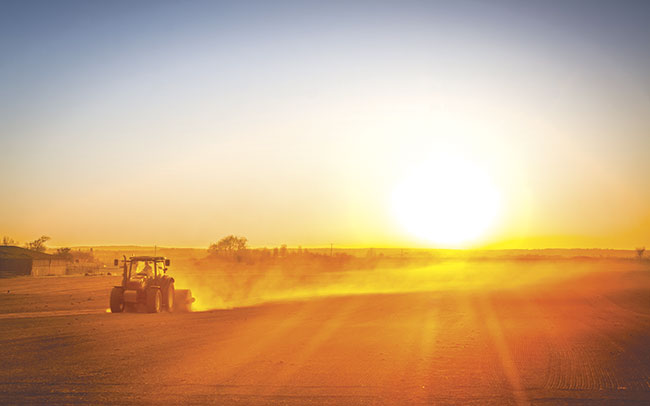 Agriculture covers a multitude of operations, large and small, across the globe and its insurance has evolved to meet the demand, whenever and wherever required, as Liz Booth reports

Farming is the UK's most dangerous industry, with more work-related injuries than any other sector, including construction.

It is also the second most illness-prone sector, behind the health and social work sector, according to the latest figures from the UK's Health and Safety Executive. Those in the farming sector say farming overtook construction in terms of the number of incidents after the latter embarked on a massive campaign to drive the number of accidents down.

Tim Price, rural affairs specialist at NFU Mutual, agrees that much of the challenge comes in the size of farming operations: "Unlike other industries, farming in the UK is about small individual businesses. In the construction sector, contractors are now required to ensure all their subcontractors follow strict health and safety standards. And it has paid off."

The NFU is campaigning hard and says a stick-and-carrot approach is needed if the agriculture sector manages to drive injury claims down. It has just launched Farm Essentials, targeting the smaller operations of less than 50 hectares. Mike Lawler, head of propositions at NFU Mutual, explains: "Current economic pressures are making it increasingly difficult for farms under 50 hectares to thrive.

That's why we have developed a special policy that provides the protection they need, [as well as] the expert and local service our customers expect, which results in 93% of our policies being renewed and potentially lower premiums."

Graham Plaister, a practising farmer and agricultural adjuster with Agrical, part of loss adjuster McLarens, says one of the challenges for the farming industry -- and its insurers -- is the rapidly changing nature of the risks. There is little in the way of crop insurance in the UK, so when crops are in the field and land is flooded there is no claim, as such. However, business interruption is an increasing part of the agricultural insurance package and claims will be paid if the farm buildings are inaccessible due to flooding.

Likewise, on the livestock side, there are constantly evolving disease threats. The last outbreak of Foot and Mouth hit the headlines for weeks on end and devastated many farms, while Bovine TB has also become a contentious issue in the media. Meanwhile, in December, the government's Chief Vet declared a Prevention Zone introducing enhanced biosecurity for poultry and captive birds, to protect them from a strain of avian flu circulating in mainland Europe. Since 3 November, highly pathogenic avian influenza has been found in dead wild birds in Austria, Croatia, Denmark, Finland, France, Germany, Hungary, Netherlands, Poland, Romania, Sweden, Switzerland, Ukraine and Russia.

Agricultural is far from limited to the UK or to small operations. And its insurance therefore covers a multitude of sectors. According to McKinsey, food and agribusiness form a $5trn global industry that is only getting bigger. If current trends continue, by 2050 caloric demand will increase by 70% and crop demand for human consumption and animal feed will increase by at least 100%. Meeting this demand won't be easy: for example, 40% of water demand in 2030 is unlikely to be met and more than 20% of arable land is already degraded.

Since 2005, however, the share of emerging market premiums has increased, and in 2011 they were 22%, driven largely by major growth in Brazil, China and India (Swiss Re, 2013). Earlier this year, Markel International joined forces with Tokio Marine Kiln, Pembroke and AEGIS London to lead the Markel Livestock consortium, offering cover of up to $30m per location, for livestock risks. Robert Wells, senior underwriter, global livestock, Markel International, explains that the consortium offers larger single-risk capacity than that usually available in the market and reflects the growing scale and value of farms and their livestock internationally, as well as the increasing incidence of pandemic risks, such as Avian Influenza and Foot and Mouth disease.

He says: "The market needed single-source capacity to deal with these larger risks and to meet the needs of brokers who have been successfully developing demand for such policies."

On the subject of Avian Influenza and the way it is spreading worldwide, Mr Wells says an outbreak in the US caused a sharp increase in claims, particularly on the business interruption side, while unusually severe snow storms resulted in the death of thousands of cattle, the vast majority of which would have been insured.

The global nature of the business means animals are often moved as part of breeding programmes and some of the more exotic claims come from game conservancy. For example, Markel provides cover for rhinos being moved to more secure areas away from poachers.

The diversity and challenges facing the agricultural sector are evolving and in many cases increasing, and insurers are looking to match that changing demand. For many, climate change is likely to bring the greatest changes in the future but, for now, most say they are keeping a watching brief rather than suffering directly in terms of claims.