Heading for the Brexit 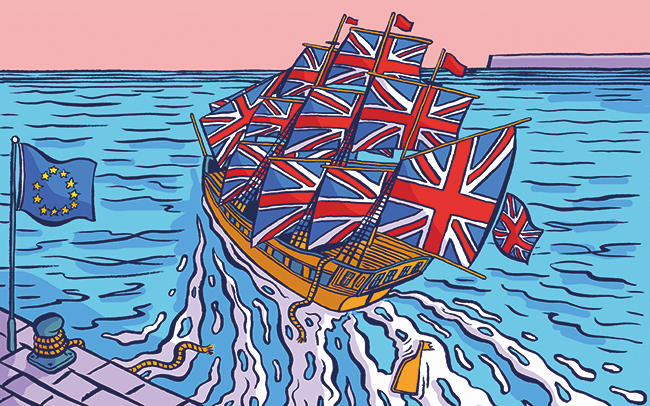 Liz Booth examines the implications of Brexit for the insurance profession

At the time of The Journal going to press, a Brexit deal with the European Union had yet to be reached and Prime Minister Boris Johnson had headed to Brussels for crunch talks. The constant message from the UK government had been citizens and businesses must prepare for the worst case no-deal scenario.

The few stories about that scenario that do appear in the public domain centre on the risk of delays at ports and in accessing crucial supplies, from food to drugs and beyond. For the insurance profession, the question could be whether this raises the spectre of more business interruption claims as businesses once again look to their insurers for financial support.

However, unlike with the Covid-19 cases, insurers are much clearer and brokers have been warning their insureds that it is most unlikely that post-Brexit delay at ports, for example, would be covered.

As lawyers at Kennedys explain: “Many insurance policies seek to exclude delay or the consequences of delay. Delays also give rise to other potential knock-on problems – static commercial vehicles outside major ports are very vulnerable to attack by thieves or by migrants attempting to get into the UK.

“Access to trailers by thieves or migrants gives rise to the cargo within being lost, destroyed or possibly seized. Again, this raises some interesting causation questions under cargo policies, where the access to the trailer occurs due to delays at the customs border.

“The risk is clear, so a review of the insurance arrangements should be made at this stage. Furthermore, where those delays (and thus the vulnerability of the cargo) are caused through a failure by the cargo owner to complete the proper documentation, disputes are likely to arise unless these issues are addressed contractually before the delays occur. The delays may be caused by the cargo owner, but the haulier continues to owe duties towards the cargo.”

More recent research by analysis experts Mactavish shows that 22% of senior executives and managers at British firms believe that in the next 12 months, there is a strong chance their organisations will make business interruption insurance claims linked to damages and losses worsened by a disorderly Brexit. However, Mactavish believes that many of these claims risk being rejected.

The research states: “Brexit insurance claim rejections are likely because the organisations may not have informed their insurers of these risks, something that they are legally required to do. Of those surveyed, 18% of senior executives and managers who believe their organisations are at risk from Brexit, say their employers have not notified their insurers of these risks.

“Only 25% of those who believe they are facing Brexit-related risks say their insurers have been informed of these. The remainder either do not know if this is the case or believe they do not face any specific Brexit threats.”

Mactavish also warns that individual directors at these organisations could personally be exposed to legal action for not informing insurers of these risks, because of traditional limitations applied to directors and officers insurance cover.

And ironically, businesses that have escaped the worst effects of the economic fallout from the Covid-19 pandemic are typically in sectors that are more likely to feel the impacts of Brexit, new analysis finds.

A report from the London School of Economics’ Centre for Economic Performance, titled Covid-19 and Brexit: Real-time updates on business performance in the UK, reveals that when comparing the effect of Covid-19 with the predicted impact of increased trade barriers with the EU, there is some evidence that those less hit by Covid-19 are likely to suffer more from Brexit. Electrical, optical equipment and chemicals are examples of such sectors.

“A closer look shows that the experiences of industries differ a lot. While businesses such as hotels and restaurants have been hit hard by Covid-19, they are predicted to see little change from trade rules with the EU. Other sectors, however, such as inland transport, have been impacted by the pandemic and are also expected to be significantly affected by a no-deal Brexit, thus experiencing a double hit,” states the report.

Worryingly, concludes Bruce Hepburn, CEO of Mactavish: “Our findings show that many businesses are facing significant risks from a disorderly Brexit, and that many have not prepared for this properly or adequately informed their insurers of these. All of this creates several insurance-related challenges and it can be difficult to know what they are covered for.”

But what about the insurers and brokers themselves? The London Insurance Brokers Association has already pointed to a surge in its members opening offices in Brussels to ensure they can continue trading in Europe next year.

The UK’s Chancellor Rishi Sunak has been at pains to emphasise the importance of financial services to the UK and the need for the sector to continue to thrive.

As the Financial Services Bill went through Parliament in November, he told MPs: “Financial services will be essential to our economic recovery from coronavirus, creating jobs and growth right across our country. And, as we leave the EU and start a new chapter in the history of financial services in this country, we want to renew the UK’s position as the world’s preeminent financial centre.”

Richard Woodman, partner and head of financial services at Royds Withy King, notes: “The Chancellor’s statement identified the opportunity to set out a new vision for this sector as we leave the EU – one that is open, innovative and world leading in the use of green finance.

“The government’s framework of equivalence decisions for the EU and EEA member states now gives clarity to firms based here and in Europe for managing cross-border financial services activity. Using equivalence when it is in the UK’s economic interests to do so offers a technical, outcomes-based approach that prioritises stability, openness and transparency.”

Nausicaa Delfas, executive director of international, recently told delegates at the UK’s Regulatory Regime for Financial Services Summit: “Having been a member of the EU for nearly 50 years and having incorporated EU laws and regulations into our statutes and regulatory rulebooks, the UK has a regulatory regime that is the most equivalent to the EU’s in the world. As such, agreements on mutual equivalence should clearly be possible. However, apart from a temporary decision on central counterparties, no equivalence arrangements have currently been made by the EU.”

She stressed that, according to the Financial Policy Committee (FPC), “most risks to UK financial stability... at the end of the transition period, had been mitigated”. But the FPC does not rule out market disruption as the UK transitions to new trading arrangements with the EU.

On 1 January 2021, the UK will assume membership of the Green Card system in a similar way to some other non-EU/EEA countries.

This article appeared in our December/January 2021 issue of The Journal.
Click here to view this issue
Topics:
Regulation